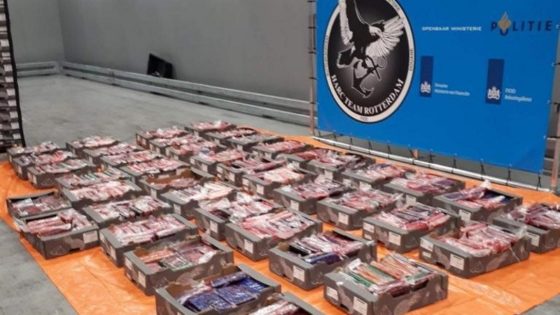 Part of the haul. Photo: Politie.nl

Police and customs officials have seized a further 1.5 tonnes of cocaine in two shipments at Rotterdam port in recent days.

The two companies where the shipments were heading, in Ter Aar and Westland, were unlikely to know about the shipments, police said.

In September, European police organisation Europol said the increased use of shipping containers to conceal drugs had made the high volume ports of Antwerp, Rotterdam and Hamburg the new epicentre of the European cocaine market.

Later that month, nine people were found suffering from breathing difficulties after becoming trapped in a container while waiting to pick up a drugs shipment.

Port police chief Jan Janse told the Telegraaf at the time that one method used by drugs gangs involves driving a container full of people into the port. The driver then drops the container close to where the drugs are so that they can pick up the drugs.

‘This is only possible thanks to corrupt people working for transport and port companies,’ he said. Officials also regularly find containers equipped with food and sleeping areas, which the gangs use to hide in until they can get at the drugs, Janse said.

Last year, some 40 tonnes of cocaine was found hidden in containers at Rotterdam.