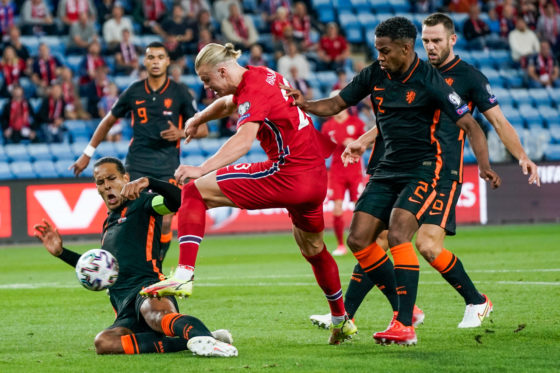 Louis van Gaal said his players gave the ball away too cheaply during the 1-1 draw in Oslo that leaves their World Cup qualifying campaign hanging in the balance.

Norway went 1-0 ahead in the 20th minute when striker Erling Braut Haaland squeezed a shot underneath Justin Bijlow, but equalised before half-time as Davy Klaassen converted Georginio Wijnaldum’s cross from close range.

Haaland had the best chance to win the game after half-time when his shot cannoned back off the post, although Denzel Dumfries fluffed a good chance in front of goal in the closing minutes.

‘We didn’t play not to lose, we played to win,’ said Van Gaal. ‘That didn’t happen, and that was mainly because we lost possession in situations where we shouldn’t have done.’

Van Gaal admitted his team had struggled to contain Haaland, but did not blame his defenders for the result. ‘I though [Stefan] de Vrij had a really fantastic game,’ he said. ‘We can believe this Dutch team are world beaters, but that’s not the case.’

The Dutch were given an unexpected boost when group leaders Turkey surrendered a 2-1 lead in the 98th minute to draw with Montenegro.

The results mean just one point separates the top four teams in Group G, with Turkey still leading on eight, followed by the Netherlands, Norway and Montenegro, all on seven.

The Dutch now face home matches against Montenegro on Saturday and Turkey next Tuesday. Four of their remaining six games are at home, with the campaign concluding with the return fixture against Norway on November 16.