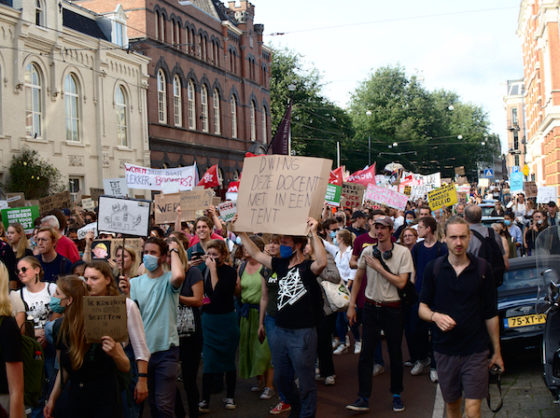 The demonstrators marched from Westerpark to the Dam. Photo: Wouter van de Klippe

An estimated 15,000 people took part in Sunday’s demonstration in Amsterdam, calling for an end to the housing crisis, the organisers said.

The demonstration was organised by campaign group Woonprotest and was backed by over 200 organisations, including political parties, trade unions and housing corporations, as well as housing rights activists.

With house prices continuing to soar, a serious shortage of affordable rental accommodation and long waiting lists for social housing, action is needed to make ending the crisis a top priority, the organisers say.

Abel Heijkamp, a campaigner with the Bond Precaire Woonvormen, which works with people in precarious living circumstances, said there is an urgent need for a multi-level movement for housing justice in the Netherlands.

‘We need people to mobilise locally in their communities, at the city level, municipal level, and also at the national level. If we can mobilise at all these levels, we can finally end this housing crisis,’ he told DutchNews.nl.

The ultimate aim, Heijkamp said, is that people have a ‘secure and affordable living situation’.

Amsterdam Noord resident Annelies Groot said she was struck at the size of the demonstration. ‘People seem to finally have woken up to the scale of the housing crisis,’ she told DutchNews.nl. ‘I remember back when my social housing complex was being sold, and we went to protest at the housing corporation and barely a few hundred people came’.

‘We cannot think of just housing,’ she said. ‘The amount you spend on rent determines how much you can spend on other life necessities – the cost of rent determines and limits your opportunities in this society’.

Yuval Danon, an art student living in Amsterdam, said he was well aware of the impact of the housing crisis, ‘I have six or seven international student friends looking for homes who don’t know what to do,’ he said. They don’t know where to stay. I was kicked out of my house for three weeks, and fortunately I found a place’.

Nationwide, thousands of international students are without a permanent place to live and this weekend it emerged that many local authorities, including Amsterdam, Rotterdam and Wageningen, have no idea how many are affected.

Later in the day, police arrested 61 people after they attempted to squat an empty building. Squatting was made illegal in the Netherlands in 2010.

The squatters later issued a statement condemning the police for using excessive violence and arguing that squatting is a form of protest. The building they attempted to take over has been vacant for multiple years, and is one of 116 buildings owned by Rogier Thewassen, the CEO of Young Capital, the squatters said.

The Woonprotest demonstration on Sunday was only the first of several demonstrations scheduled to take place this autumn. Woonopstand, a separate coalition of housing justice organisations, is planning another demonstration in Rotterdam on October 17.