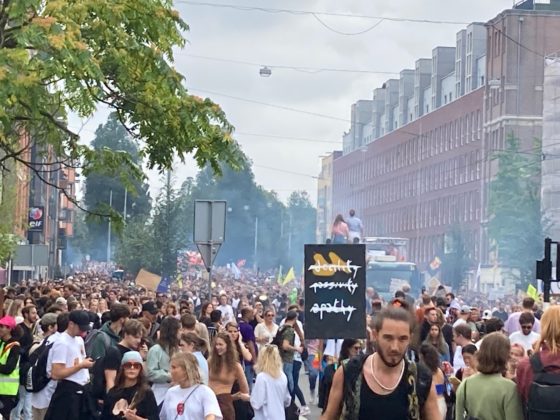 Protestors calling for clubs to reopen in Amsterdam. Photo: DutchNews.nl

The Netherlands will drop 1.5 metre social distancing as an official coronavirus measure on September 25 but will require proof of vaccination or a negative test for bar, café and cinema visits from that date, cabinet sources say.

Ministers met on Sunday to finalise their latest coronavirus plans ahead of Tuesday’s formal announcement, but as usual, the main agreements were leaked to the press after the meeting.

According to broadcaster NOS, government health advisors had said that the only way the 1.5 metre rule could be abandoned was to introduce the CoronaCheck system in busy indoor spaces, such as bars and theatres. Without this, the risk that vulnerable people become ill would be too great, the Outbreak Management Team said.

Coronavirus tests to attend an event are currently free, but ministers had suggested introducing fees from the end of September as a way of encouraging more people to get vaccinated. According to some reports, this idea has now been dropped because of opposition in parliament.

Face masks are also set to remain compulsory on public transport, despite earlier suggestions that requirement could also be dropped. But they will no longer be required on station platforms or at bus stops.

Limits on numbers will also end at football stadiums, but fans will have to show they have either been vaccinated or have had a negative test within 24 hours to watch a match.

However, hopes that cafes and bars could open past midnight are set to be dashed, and opening hours will continue to be restricted to 6am to 12pm, meaning night clubs will remain shut.

No concrete decisions have yet been taken about the events sector, according to broadcaster NOS and the Financieele Dagblad. Events with more than 750 people are currently banned and tens of thousands of people took to the streets at demonstrations across the country on Saturday calling for change.

Although a large majority of the population – well over 70% – is now fully vaccinated, some 1.8 million people have not been jabbed or are not sufficiently protected by the vaccine.

In addition, the number of positive tests per day is now relatively stable although high, at around 2,500 a day. The R number, or reproduction rate, is also hovering at around 1.

The changes to the coronavirus rules will be formally announced at a press conference by prime minister Mark Rutte and health minister Hugo de Jonge on Tuesday evening. You can follow the meeting via DutchNews.nl’s Twitter feed.