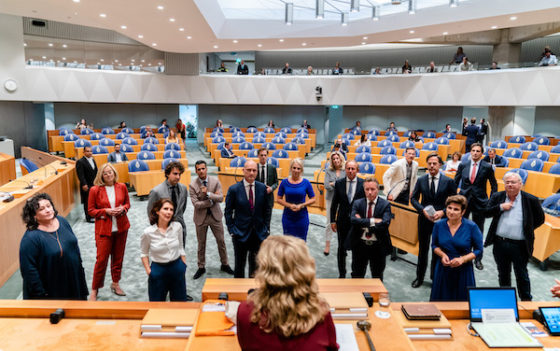 Party leaders ahead of the debate with Kaag in red. Photo: Bart Maat ANP

Prime minister and VVD leader Mark Rutte and D66 chief Sigrid Kaag have buried the hatchet, superficially at least, and vowed to restart their search for a new coalition government, despite Kaag’s veiled criticism of Rutte on Monday evening.

During Tuesday’s debate on the failure of efforts to find a new alliance, over six months since the current government resigned over the child benefit scandal, Kaag appeared conciliatory in tone and said her criticism went wider than the prime minister, the Volkskrant said in its analysis.

In the annual HJ Schoo lecture, the traditional curtain-raiser to the political year, Kaag said a ‘shadow had fallen’ on the political landscape of the Netherlands ‘where we are so keen to congratulate ourselves on our mature leadership, reasonableness, willingness to compromise and sense of justice.’

While she did not mention the prime minister by name, the speech was widely seen as an attack on Rutte, who has refused so far to compromise on Kaag’s demand that the PvdA and GroenLinks be seen as suitable coalition partners.

Rutte too refused to be drawn on the conflict despite being pressed by MPs, saying only that ‘this country faces major challenges which need to be solved quickly.’

Troubleshooter Johan Remkes has now been brought in to take over the role of coalition negotiator. Currently it appears as a if a minority coalition is in the making, involving the VVD and D66, both of which won seats in the March general election, and the Christian Democrats who lost.

The Financieele Dagblad said Kaag still backs a majority cabinet even though that is now very unlikely, given that three months of talks have failed to reach a result and ‘all the options’ have been put forward.

D66 wants to keep the door open to a majority coalition but will start the new round of talks with Remkes with the search for a minority, the paper said.


The Volkskrant says that a minority cabinet will only be a success if Rutte is able to restore the confidence of opposition parties. In particular, his rejection of  GroenLinks and the PvdA as coalition parties could make it tricky.

In addition, PvdA chief Lilianne Ploumen appeared to close the door on the idea during the debate, the paper points out, saying ‘a minority government will not be able to count on any form of support from us. We will vigorously oppose right-wing policies,’ she said.