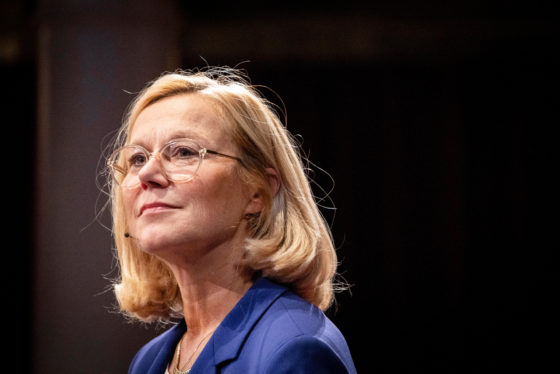 D66 leader Sigrid Kaag has strongly criticised Mark Rutte’s style of leadership, accusing him of ‘political myopia’ on the eve of a parliamentary debate on the first stage of the coalition talks.

Kaag did not mention Rutte by name as she delivered the HJ Schoo lecture, the traditional curtain-raiser to the political year, but said a ‘shadow had fallen’ on the political landscape of the Netherlands ‘where we are so keen to congratulate ourselves on our mature leadership, reasonableness, willingness to compromise and sense of justice.’

Last week the coalition talks were whittled down to three parties – D66, Rutte’s right-wing liberal VVD and the Christian Democrats (CDA) – making a minority cabinet inevitable. On Tuesday MPs are holding a debate on the initial phase of talks with chair Mariëtte Hamer.

Hamer, whose role was to sound out potential partners after the general election in March, said in her concluding report that personal and political differences had blocked the way to a majority coalition.

Kaag’s preference for a five-way combination with Labour (PvdA) and GroenLinks was rejected by Rutte and CDA leader Wopke Hoekstra, while D66 had already ruled out the other viable partner, the ChristenUnie.

The loss of PvdA and GroenLinks was a setback for Kaag, who will must now negotiate a coalition deal with two conservative parties while carrying the hopes of progressive voters who delivered D66’s best ever election result of 24 seats.

‘The reality of the childcare benefit scandal and the coronavirus crisis management have brutally exposed the fact that a well functioning state founded on democracy and justice is never a safe possession,’ Kaag said.

‘It shows we need to learn the essential lessons about our shared humanity, trustworthiness, transparency and effective government. That applies too to those of us who shout loudest about how great our country is.

‘For too long we have allowed ourselves to be lulled into a numb sense of self-satisfaction by political myopia.’

Commentators saw her use of the word ‘gaaf’, meaning ‘cool’ or ‘great’, often used by Rutte to praise the Netherlands, as a direct critique of the prime minister’.

Kaag said the next government needed to tackle issues such as climate change, inequality in education and the welfare state – all areas where D66’s progressive agenda is likely to meet resistance from VVD and CDA.

She said a ‘good cabinet in the Dutch tradition’ was a compromise of of progressive and conservative forces and cited Rutte’s first cabinet as an example of the opposite. The minority administration of VVD and CDA, propped up by a confidence and supply deal with Geert Wilders’s right-wing anti-Islam PVV party, collapsed after 18 months.

‘Our country is moderate in the fundamental sense. We make room for each other. We give each other space and a share in the future our country.

‘That is I will continue to make the case for a stable, progressive, balanced coalition that represents all Dutch people, in whatever form it takes.’