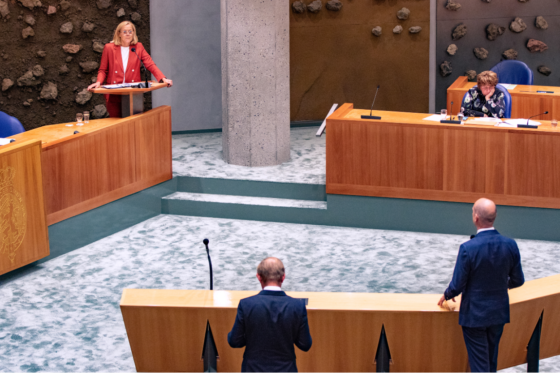 D66 leader Sigrid Kaag has said she is prepared to resume talks with six parties – including the ChristenUnie (CU) – in a bid to break the impasse in the formation of the next cabinet.

Kaag had earlier ruled out working with the CU because of fundamental differences on medical-ethical issues such as euthanasia, abortion and embryo research. The two parties agreed not to legislate in those areas when they joined the last coalition in 2017, but Kaag was unwilling to continue the non-aggression pact.

She told party members in Amsterdam on Sunday that she was changing course in an attempt to force a breakthrough six months after the general election.

D66 had favoured a five-party coalition with the right-wing liberal VVD, the Christian Democrats (CDA) and the two centre-left parties Labour (PvdA) and GroenLinks. But VVD leader Mark Rutte and his CDA counterpart Wopke Hoekstra argued it would be too unstable.

That left a minority combination of VVD, CDA and D66, who hold 72 of the 150 seats in parliament, as the only viable option. But both Rutte and Johan Remkes, the former VVD minister chairing the negotiations, say they would prefer a majority cabinet.

‘Obviously there is no guarantee of an outcome, but the country is hankering for a breakthrough.’

CU leader Gert-Jan Segers also indicated at the weekend that he had softened his stance since mid-August, when Kaag told AD.nl that she did not see the two parties working together again.

The CU’s five MPs voted for a motion of disapproval over the government’s handling of the evacuation of Afghanistan on September 16, meaning it passed, prompting the resignation of Kaag as foreign minister.

Segers told AD.nl that it was ‘simply untrue’ that the vote was an act of revenge for Kaag shutting the door on collaborating with the CU.

‘I phoned Sigrid Kaag to tell her that. I don’t feel any anger towards D66. D66 made a legitimate political choice,’ he said.

‘I see people making a big deal of the medical-ethical point. Yet there were so many moments in the last four years when D66 and ChristenUnie stood shoulder to shoulder.’