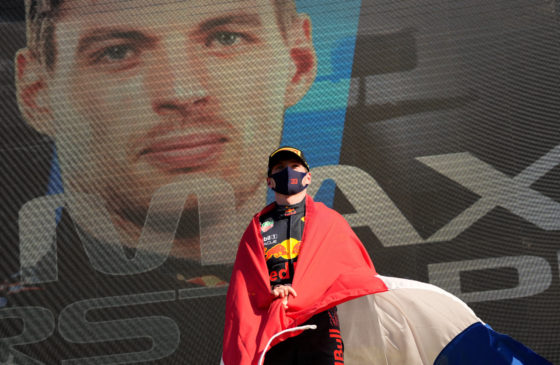 The return of Grand Prix racing to Zandvoort at the weekend has been hailed as a sporting triumph as 70,000 fans turned the stands into a sea of orange for their hero, Max Verstappen.

The 23-year-old delivered the result the organisers and most of the crowd hoped for with his seventh win of the season and the 17th of his career, regaining the lead in the drivers’ championship in the process.

Verstappen edged out his rival, Lewis Hamilton, for pole position on Saturday and never looked like relinquishing the lead through the 72-lap race, while his Red Bull team-mate, Sergio Perez, was voted driver of the day for finishing eighth despite starting from the pit lane.

The race’s sporting director, Jan Lammers, said Verstappen was clearly relieved to have won after carrying the expectations of a nation. ‘The fans are great of course, but you saw that he could only really enjoy himself after the race,’ he said.

‘When he looks back at the replays he’ll be able to see what a great race it was, but Max needed to get the points first before he could celebrate.’

Off the track the organisation was widely praised as well, particularly for the fact that just 2% of spectators travelled to the race by car, with the rest arriving by train or on two wheels.

The main focus of concern was the absence of visible pandemic restrictions, although the racetrack was limited to two-thirds capacity and spectators had to produce negative tests on entry.

Though Zandvoort was officially classed as a ‘seated event’, the sight of packed stands and crowds of spectators going to and from the circuit, with not a face mask in sight, drew criticism at a time when 1 person in 1,000 in the Netherlands is still testing positive for coronavirus every week.

Rob Langenberg, in charge of logistics at Zandvoort, told NOS the operation to transport tens of thousands of fans, as well as the teams and media, to the circuit in the dunes was one of the weekend’s biggest successes.

‘Logistics was the biggest worry for Formula One Management (FOM),’ he said. ‘But we more than delivered on it. They said: nowhere on the F1-calendar is better organised.

Langenberg is aiming to reduce the number of spectators travelling to the race by car to zero by the end of the initial three-year contract. ‘That percentage is just two per cent already. And some of the car parks we had to set up for FOM were empty. We realised we need to be creative.’

Drivers gave the revamped circuit a vote of confidence, with Hamilton describing it as ‘epic’. ‘This is now one of my favourite circuits,’ he said. ‘I’m already looking forward to next year.’

Williams’s Canadian driver Nicolas Latifi said the tight track and banked corners gave it the feel of a vintage circuit. ‘The speeds are high and the track is narrow, a real old-school circuit. If you make a mistake you get punished straight away.’

Zandvoort!! Thank you for this crazy experience🟠 #MSC47 pic.twitter.com/Qp3iEsWXRS

The experience was a contrast from the mid-1980s, when Formula One boss Bernie Ecclestone dropped Zandvoort from the race calendar because of its outdated facilities and dwindling numbers of supporters. Only around 25,000 people attended the previous race in 1985, when Niki Lauda edged out Alain Prost at the chequered flag.

One bone of contention was the restricted paddock area, meaning the teams and their entourage had to park their motor homes elsewhere and shuttle back and forth on foot or by bike all weekend.

Haas team boss Günter Steiner said: ‘It would be easier if we didn’t have to walk so far, but it’s just like in Monaco. There’s no room for Formula One there either. But you have to deal with it, not moan about it. The historic racing atmosphere compensates for everything.’