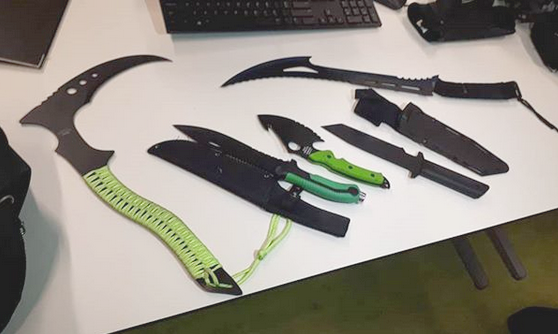 Youngsters can hand in their knives anonymously to the police during a new national knife amnesty launched by the justice ministry and over 200 local councils.

The amnesty, from October 11 to October 17, is aimed at reducing knife crime among teens which increased significantly in 2020 and even doubled in Rotterdam.

‘To carry a knife is often to use a knife,’ justice minister Sander Dekker said. ‘A row can easily escalate into a stabbing. Teens and weapons, we need to get rid of that combination.’

Carrying weapons such as flick knives and butterfly knives is illegal but carrying an ordinary knife of up to 28cm is allowed by law. The justice ministry is working on a law to prohibit the sale of any knives to teenagers.

An awareness campaign with the slogan ‘Drop your knife, and do something with your life’ will accompany the amnesty and is aimed at teenagers themselves and their parents. Police are also stepping up checks at schools and searching school lockers for illegal weapons.

Meanwhile, police confiscated knives which were being given out as prizes at a fair in Zaandam at the weekend. Knife wielding teens are becoming a big problem in Zaanstad, with four stabbings in five days in January this year.

‘The fair is to have fun, a place where children eat candy floss and you get an adrenaline kick from the the rides. But unfortunately you can also win weapons or fake weapons at fairs. That is something we don’t want,’ Zaandam mayor Jan Hamming said.