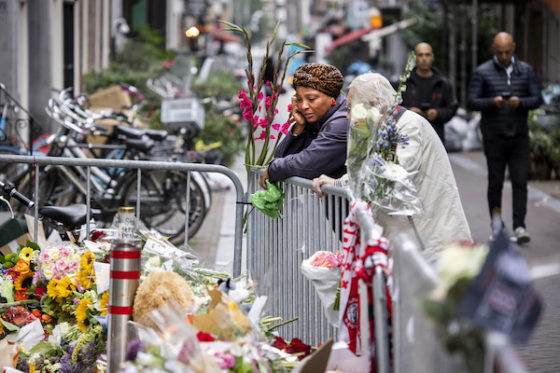 Mourners at the spot where he was shot. Photo: Ramon van Flymen ANP

The death of crime journalist Peter R. de Vries dominates the front pages on Friday, with photos taking up most of the cover of the Telegraaf, AD and Volkskrant.

The Telegraaf, where De Vries began his career in 1978, devoted its first four pages to giving friends and colleagues space to share their stories.

‘His reserved appearance, the piercing look and the nasal voice; they were a turn-off to some. But the people who knew him better knew that those wrinkles next to his eyes indicated humor and other emotions,’ the paper’s court reporter Saskia Belleman said.

‘Relatives of the victims of crime which De Vries took on, were crazy about him. If Peter got involved in your case, you knew that they would not be forgotten.’

De Vries was perhaps best known for his work on cold cases – ensuring that several high profile murders were finally resolved years after the fact. But he also fought for refugee rights and was a staunch critic of racism and far right politics.

Prime minister Mark Rutte said that De Vries was ‘always in search of the truth and justice.’ And that, Rutte said, ‘makes it all the more dramatic that such a great injustice has been done to him.’

In the Lange Leidesdwarstraat in Amsterdam, where De Vries was shot 10 days ago after appearing on a television programme, dozens of people have come to pay tribute and lay flowers.

Television talk shows on Thursday night were also devoted to De Vries, who was a frequent guest on many. In total, 4.7 million people watched one of more programmes, according to official figures.

An online condolence book has also been opened and signed by thousands of well wishers.

‘Justice, that is what you stood for. You were a hero,’ wrote Ibrahim Yaman. ‘Beaten in the battle against injustice. Your life was taken from you in such a cowardly way. You will never be forgotten,’ wrote Sandra de Bruijn.

The 64-year-old’s family said they were ‘immeasurably proud, but also inconsolable’ as they confirmed his death in a statement on Thursday.

De Vries was shot in the head from close range on July 6, just after leaving a television studio at around 7.30pm.

Two men have been arrested for the murder and have been remanded in custody.