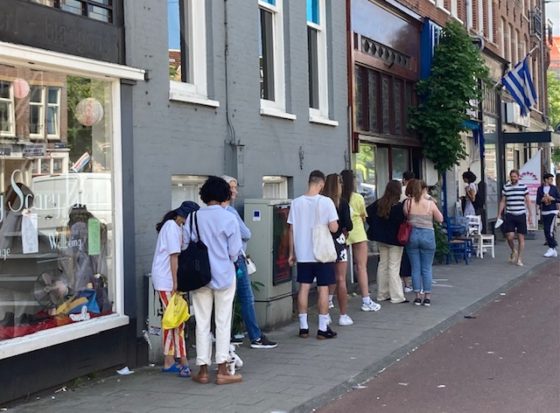 People waiting for a ‘test for entry’ test. Photo: DutchNews.nl

The much criticized ‘test for entry’ system may be virtually dormant since clubs were closed again, but the 11 companies involved are notching up €1m a day between them for providing the service, the Volkskrant reported on Friday.

Ministers ordered clubs to close and banned festivals on July 9 following the surge in coronavirus cases, with over 1,000 infections traced back to one event alone.

The test for entry system is now only being used for seated events such as sports matches and last week just 68,000 tests were taken, the paper said. In the first week of July, over 500,000 people had a fast test so they could attend an event.

The 11 commercial companies which have won contracts to provide the tests are paid on the basis of capacity, not tests, even if it is not used.

Pier Eringa, chairman of Stichting Open Nederland, the foundation running the testing system, told the paper that capacity has now been reduced by half. ‘But we have to keep the shop open, even if there are not many clients,’ he said. ‘That is the price we pay to be sure we have enough capacity when it is necessary.

‘There is a risk that the companies would decide to do something else,’ he said. ‘And we don’t pay the fire service per fire they put out.’

Eringa told the Volkskrant he did think the time is right to streamline the different testing trajectories into a single operation in order to be more flexible and efficient. Currently, people with symptoms are tested by regional health boards, for example, and people who have free test so they can travel abroad are treated separately again.

The government will decide on August 13 if it is possible to reopen clubs and sanction festivals.

The total bill for the project, which was initially to run until the end of August, is now put at €700m, down from an earlier estimation of €1.1bn.