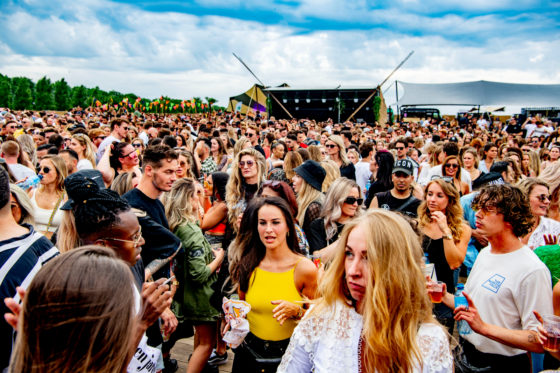 Test for entry was used at the Chin Chin Festival in Amsterdam. Photo: ANP/Robin Utrecht

The ‘test for entry’ system to enable venues such as nightclubs to reopen has come under fire again after a 21-year-old man revealed he had been wrongly given a negative result.

The man, named by NH Nieuws as Danny, went out in Amsterdam on Saturday believing he was clear of the virus. ‘I had a bit of a cold, but I thought: I’ll get tested so I know for sure,’ he said. ‘My test result was negative, so we went into town.’

Danny’s first night out in 18 months ended at the Chupitos shot bar on Zieseniskade, where he stayed till the early hours. ‘I met masses of people, hugged a lot of people, including older people I know from restaurants.’

At 9am, three hours after going to bed, he was woken by a call from test organisation to Covidia to tell him that his details had been put into the system wrongly. ‘I knew straight away,’ he said. ‘They said at the test that they’d call if you had coronavirus.’

A spokesman for Testen voor Toegang confirmed to NH Nieuws that Danny had been given the wrong test result. The company said everyone who had come into contact with him on Saturday would be notified.

The test for entry system was set up to allow venues to open safely without the need for social distancing or masks by requiring everyone to produce a negative PCR test on entry.

But teething troubles on the opening weekend meant some people were given negative test certificates as ‘compensation’ because their actual results were unavailable, while some clubbers said they had been able to bypass the system by sharing QR codes with their friends.

At least 165 people have tested positive following an outbreak at the Aspen Valley club in Enschede last weekend. The GGD for the Twente region has urged all 600 people who were in the venue to go for a coronavirus test.

‘We did everything in our power to make sure people came in safely,’ Aspen Valley spokesman Tommy de Groot told Tubantia. ‘Everyone’s ID was checked beforehand and scanned with the corona app. Whether the system is watertight is not something I want to get into.’

The number of infections rose rapidly at the weekend, partly as a result of test for entry results being included in the system. However, there were notable spikes in student cities such as Enschede, Amsterdam and Groningen, which until last week had one of the lowest infection rates in the country.

Hospital cases are continuing to decline, with the number of coronavirus patients in intensive care below 100 for the first time since last September. The trend in hospital admissions tends to lag about five days behind infections, reflecting the progress of the illness.

Vaccination appointments were opened to people born in 2006 on Monday morning following the government’s decision to extend to programme to everyone over the age of 12. Teenagers born in 2004 and 2005 have been able to book their vaccines since the weekend, either online at coronatest.nl or by calling 0800 7070.

Diederik Gommers, chair of the Dutch intensive care association NVIC, told BNR he did not expect another lockdown in the summer despite the rise in cases caused by the more infections Delta variant, which was first detected in India.

‘At the moment we don’t expect the hospitals to overrun or that we’ll need to go back into lockdown,’ he said on his podcast Vraag het Gommers. ‘We think we can control it.’

Gommers said fewer coronavirus patients would end up in hospital now that more than 35% of the population has been fully vaccinated, including the majority of people in the more vulnerable older groups. But he added that people in their seventies and eighties may need to have a booster shot in the autumn.

‘The big question is whether people who are infected will still become seriously ill,’ he said. ‘The percentage of older people who have been vaccinated is over 80%.’