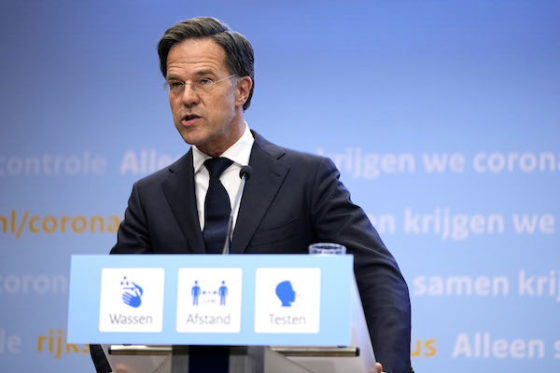 Cafes and bars will have to shut at midnight again and nightclubs will have to close their doors after the number of coronavirus infections in the Netherlands soared sevenfold in a week.

Prime minister Mark Rutte told a press conference on Friday evening that without intervention, the speed at which coronavirus is spreading will increase. The number of new infections hit 7,000 in the 24 hours to Friday morning with the under-30s accounting for the bulk of new infections.

‘Our aim is to protect those with vulnerable health conditions and the health service, as well as to cause as little damage as possible to the economy and society,’ Rutte said. ‘It is not a question of blaming a particular age group or sector.’

The new strategy is not just about tightening up the rules, Rutte said. ‘It is about our behaviour. By this I mean drinks with the neighbours, birthday parties and having barbecues in the garden.’

‘Be sensible,’ he said. ‘Keep parties small and manageable, and keep to the basic rules.’ Masks, however, are not being reintroduced and will only remain compulsory on public transport.

The government’s Outbreak Management Team said that there was no indication that masks should be brought back in shops, Rutte said in answer to questions.

The tougher rules mean that the 1.5 social distancing requirement will operate again across the entire hospitality sector and the ‘test for access’ system is being suspended for clubs and concert halls after a surge in nightlife-related cases.

Testing for entry will continue at venues with seating, such as theatres and sports stadiums.

This will continue until August 14 at least, and ministers will take a decision about what should happens next at the first cabinet meeting after the summer on August 13.

In addition, a ‘test for entry’ will only be valid for 24 hours from next Tuesday, not 40 as at present.

Health minister Hugo de Jonge denied that the decision to relax the rules on June 26 was irresponsible given what was known at the time. ‘We had expected more infections,’ he said. However, the speed at which the Delta virus is spreading had not been calculated in, he said.

Currently the under-25s account for most of the infections but they, De Jonge said, have parents and grandparents they can infect. In addition, he said, some three million people are not vaccinated or have immune problems which make the vaccine less effective.

Youngsters too can be made very ill by coronavirus, he said, and some will end up in hospital. Some 25% of the under-25 report having complaints after three months, according to research by the public health institute RIVM.

Both Rutte and De Jonge called on everyone who has not yet been vaccinated to make an appointment.

The rise in the number of cases may also put paid to people’ summer holiday plans, the health minister warned.

And he reiterated that other EU countries can impose extra conditions on people from the Netherlands if the number of infections continue to rise. ‘It is also crucial that you have a test if you come back,’ he said.

The risk to holidays has not been a factor in the decision to bring back some restrictions, he said, adding that he hoped that other EU countries would look at hospital admissions rather than infection rates when deciding if the Dutch should face quarantine or extra tests.