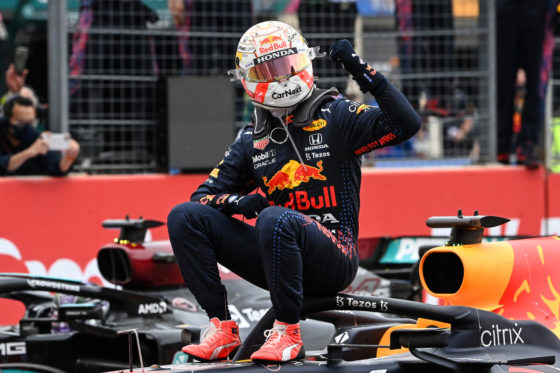 Max Verstappen described his last-gasp win at the French Grand Prix on Sunday as ‘one of the finest victories of my career’ as he extended his lead in the drivers’ championship to 12 points.

The Red Bull driver overtook world champion Lewis Hamilton on the penultimate lap to make amends for surrendering his pole position on the second corner.

He paid tribute to his team, who changed their strategy to incorporate a second pit stop, allowing Verstappen to chase down Hamilton and his Mercedes team-mate, Valtteri Bottas, in the closing laps on fresher tyres.

‘The team opted for a brilliant strategy,’ the 23-year-old told Ziggo Sport. ‘If it all works out in the end then obviously it’s absolutely perfect. If you finish second, you’re gutted, but it turned out well.’

Verstappen said the mistake at the first corner was caused by problems with grip that plagued him throughout the race and prompted the decision to take a second pit stop.

‘I braked at what felt to me like a normal point, but the car suddenly gave way. It was actually a preview of what happend the rest of the way, because I had zero grip at the back. So that was very hard.

‘At the end of the race, once we’d gone for the second stop, the car felt a bit more normal. The fact I still won is obviously a great result.’

Verstappen picked up an extra point for the fastest lap and now heads the drivers’ championship with 131 points after seven races, with Hamilton on 119. Both drivers have won three races so face.

The next two rounds are at Red Bull’s home circuit in Austria, where Verstappen won the Austrian Grand Prix in 2018 and 2019.