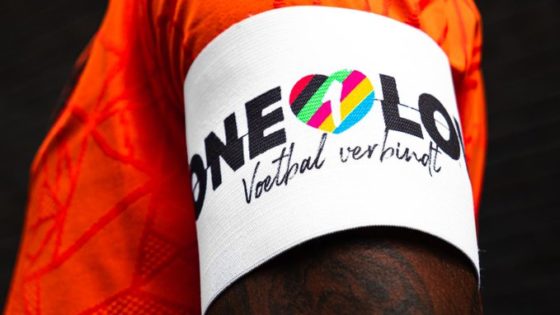 Oranje captain Georginio Wijnaldum will wear a rainbow ‘one love’ captain’s armband representing inclusiveness in football during Sunday’s round of 16 Euro 2020 match in Budapest.

‘By wearing this arm band, we as Oranje are showing that we stand for inclusiveness  and unity,’ Wijnaldum said. ‘We oppose every form of exclusion and discrimination and we hope to support everyone in the world who feels discriminated against.’

The statement comes as European football body Uefa banned the Munich authorities from turning the Allianz stadium rainbow-coloured ahead of the Hungary Germany match on Wednesday.

The rainbow illumination plan was to be a protest against new anti LGBTIQ legislation in Hungary, which is supposed to ban the ‘promotion’ of homosexuality and gender realignment surgery to the under 18s.

Munich has said it will now transform other buildings in the city in an effort to ‘send a clear signal’ to Hungary and the rest of the world.

Uefa banned the illumination plan, saying that its statutes require it to be politically and religiously neutral. ‘Given the political context of this specific request – a message aiming at a decision taken by the Hungarian national parliament – Uefa must decline this request,’ the statement said.

Dutch prime minister Mark Rutte, who has described the Hungarian legislation as ‘totally unacceptable’ has said he does not feel Oranje need to make a statement, saying protest should be up to politicians.

He is, however, raising the Hungarian issue with other European leaders at Thursday’s summit.