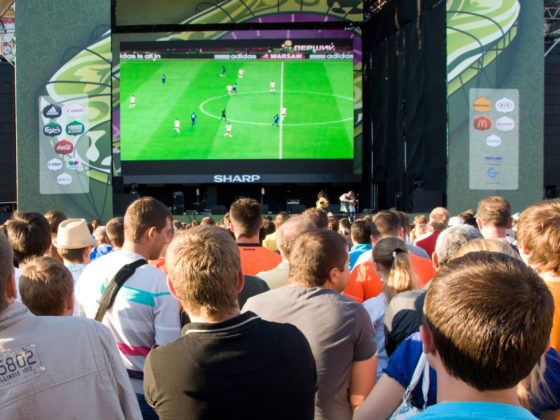 Football fans could be able to watch the later stages of this summer’s Euro 2020 championship on giant outdoor screens after all.

Hubert Bruls, chair of the national safety council (Veiligheidsberaad), said the Netherlands’ third group match against North Macedonia on June 21 could be shown to limited groups of fans.

The suggestion is a compromise between the safety council, which earlier called for a ban on big screens this summer, and the mayors of the four largest cities, who say outdoor screens are a safer alternative to watching the matches in bars.

Justice minister Ferd Grapperhaus said that the cabinet would review the current rules, which do not allow groups of more than four people from different households to meet outside, in two weeks’ time.

The review comes after the opening two matches, against Ukraine on June 13 and Austria on June 17. Both matches kick off at 9pm, meaning bars would have to send fans home at half-time because they are not allowed to stay open beyond 10pm.

Brul, who is also mayor of Nijmegen, told Nieuwsuur: ‘That would create bigger challenges for public order than not showing the match.’ But he said the safety council had not shut the door on allowing big screens for other games.

Oranje’s final group game in Amsterdam kicks off at 6pm on June 21, while the second-round match will be on June 26 or 27 if the Netherlands progress. The tournament finishes on July 11.

The cabinet is due to take the final step of its five-stage plan to lift the lockdown restrictions on June 30, but if infections continue to decline at the current rate the date could be brought forward.