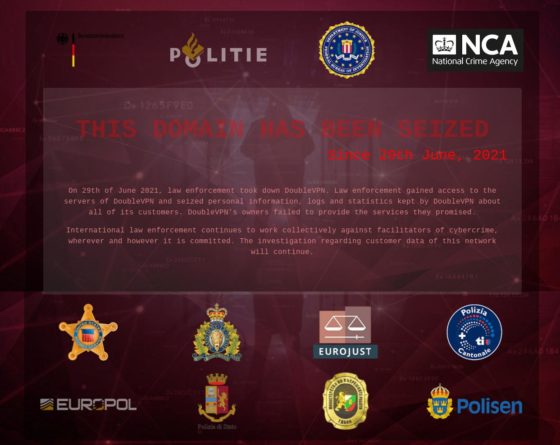 Dutch police have had a lead role in dismantling a virtual private network used by cybercriminals around the globe, European policy agency Europol said on Wednesday.

The coordinated takedown of DoubleVPN involved the seizure of servers in several countries, including the Netherlands, Germany, US and Canada. The web pages have now been replaced with a law enforcement splash page.

DoubleVPN was heavily advertised on both Russian and English-speaking underground cybercrime forums as a means to mask the location and identities of ransomware operators and phishing fraudsters, Europol said.

The service claimed to provide a high level of anonymity by offering single, double, triple and even quadruple VPN-connections to its clients, allowing them to hide their location and identity between layers of access. Its cheapest VPN-connection cost as little as €22.

‘The people behind DoubleVPN think they can remain anonymous when facilitating large-scale cybercrime operations, but they are certainly not,’ public prosecutor Wieteke Koorn said.

‘We have made it very clear they do not have a safe haven, by taking legal action and breaking into their infrastructure digitally. These criminal acts …  affect the trust of citizens and companies in digital technology.‘