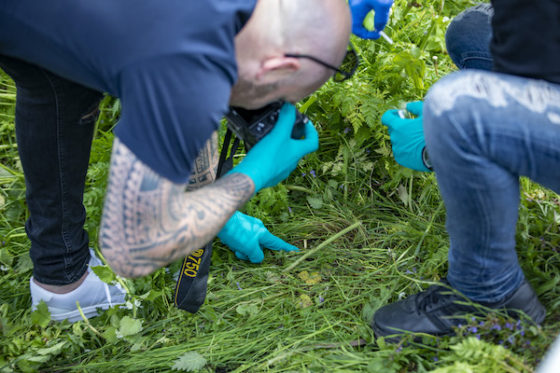 Amsterdam police have confirmed they are looking for at least two more people in connection with Wednesday’s armed robbery which led to a shoot out with police and ended in a chase across fields near the quiet commuter village of Broek in Waterland.

Police did not say what role the men had in the attempted heist, at a precious metal-working company in Amsterdam Noord. ‘We have seen on surveillance footage that two more people were involved,’ a spokeswoman told RTL Nieuws.

Police do now say that the gang of French and Belgian nationals got away with the valuables in several cars, two of which headed for Broek in Waterland. Four men were arrested there after dumping their cars and attempting to flee.  A fifth man was shot dead by police.

The third car took the A10 ring road and headed for the suburb of Diemen south of the city.

That car was found set on fire by the junction with the A10. Police did arrest another man waiting in another car at the junction. Later on Wednesday, a sixth man was arrested near Rotterdam.

‘This was a serious incident for all colleagues involved,’ police chief Frank Paauw said in a statement. ‘About 50 officers were directly confronted with automatic gun fire. I am proud of our colleagues who courageously took action and carried out these arrests.’

Paauw told current affairs show Nieuwsuur on Thursday night that all the stolen goods had been recovered. According to the Telegraaf, the gang was after a haul of gold and diamonds worth some €50m.