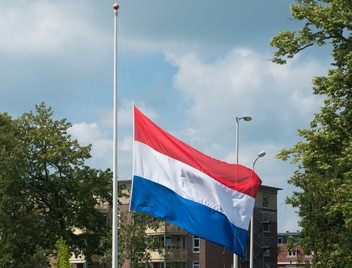 The Dutch will remember those who died in World War II with two minutes silence on Tuesday evening, but like last year, the commemorations will be modest and without crowds.

At 19.58 a trumpet will play the Last Post on an empty Dam Square and at 20.00 the country will go silent for two minutes to remember the dead.

Trains and cars will come to a halt and there are no take-offs and landings at Schiphol airport during two minutes’ silence, which takes place at 8pm. Shops and supermarkets are required by law to close at 7pm.

King Willem-Alexander and queen Maxima will lay a wreath at the memorial on Dam square in the presence of prime minister Mark Rutte and Amsterdam mayor Femke Halsema.

After the wreath laying, spoken word artist Amara van der Elst will read a piece and comedian and singer André van Duin, who grew up amid the bombed ruins of Rotterdam, will make a short address.

This year, organisers Comite 4 en 5 Mei are urging people to buy flowers and place them at a war memorial in their neighbourhood. People can also place a virtual flower at one of the 4,000 memorials nationwide via the website.

Eight in 10 people in the Netherlands believe that we can still learn from the events of World War II, according to the committee’s annual survey, and 9% think it time to let the war rest.

Among youngsters, however, just one in three see WWII as part of their history but this rises to 42% among the population in general.

Nevertheless, almost eight in 10 people say they plan to watch the ceremony on television and 85% say they consider Remembrance Day to be important or very important.

May 5, on which the Netherlands celebrates its freedom, will also be very different, with no festivals nationwide. However, the freedom flame will be lit in Wageningen as usual and there will be ceremonial flames in all 12 Dutch provinces.

This year’s May 5 lecture will be given by German chancellor Angela Merkel from Berlin. The speech will be broadcast live on NPO television.

In the evening, instead of the traditional floating concert on the Amstel river, there will be a more low key event in the foyer of the Carré theatre which will be broadcast live on NPO1.