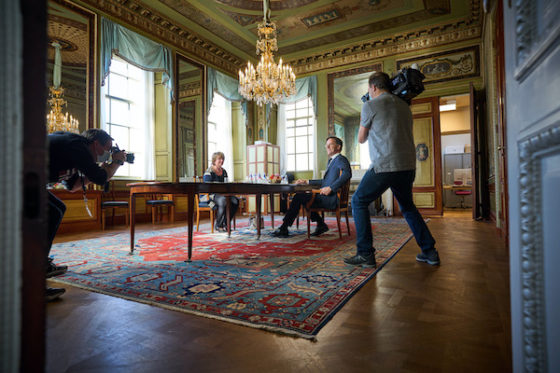 Mariette Hamer and Mark Rutte ahead of their talks. Photo: Phil Nijhuis ANP

Talks on forming a new cabinet must now speed up to ensure there is a government as soon as possible, the main party leaders say, after exchanging views with Mariette Hamer, who is leading the negotiations.

In particular the VVD, D66 and CDA – all part of the present cabinet – are calling for more speed. ‘I do not think the Netherlands will understand it if things take much longer,’ prime minister Mark Rutte said after his meeting with Hamer on Tuesday.

The general election took place two months go but since then the coalition talks have been bogged down in mistrust between the parties in the wake of the childcare benefit tax office scandal and a string of damaging leaks and revelations.

Hamer was charged with taking over the formation process a week ago.

D66 leader Sigrid Kaag said after her meeting with Hamer that there should be a new cabinet before the summer recess. ‘That is our ambition and our approach,’ she told reporters. ‘We want a cabinet that is as stable and progressive as possible,’ she said, adding that GroenLinks, the PvdA, VVD and CDA are potential partners.

The VVD and D66 have the most seats in parliament but will need at least two other parties to form a cabinet.

PvdA leader Lilianne Ploumen said that any new government will have to pledge to invest in people. ‘If we were to be a part of it, we would not do so without GroenLinks,’ she said.

ChristenUnie, the fourth party in the outgoing cabinet, is unlikely to be part of a new coalition, its leader Gert-Jan Segers said after his talks with Hamer. There needs to be a ‘credible break with the past’, he said, referring to Rutte’s ‘forgotten’ comments about critical CDA MP Pieter Omtzigt.

Herman Tjeenk Willink, who carried out the initial formation talks, said earlier this month that despite the mistrust between parties generated by the Omtzigt affair, there is enough common ground to press ahead with forming a new coalition.

In addition, he said the agreement must focus on a few main issues and this means that choices will have to be made.

Apart from economic recovery, inequality in education, problems in the labour market and climate change have been mentioned by party leaders as primary issues for the next government.