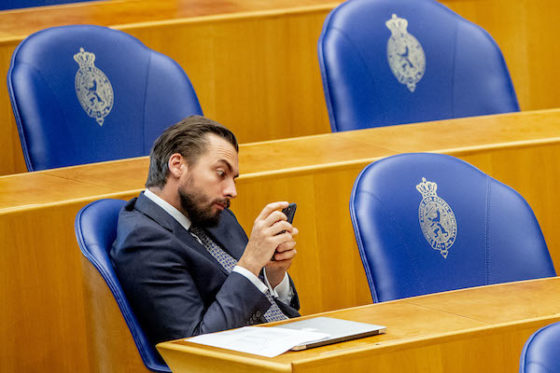 Wybren van Haga, who won almost as many preference votes as FvD leader Thierry Baudet in the national vote, is setting up his own party with the numbers three and four on the party list: Hans Smolders and Olaf Ephraim.

The decision, which Van Haga says was taken ‘in good harmony’ with the FvD, means there will now be 18 different parties in parliament, with four on the far right of the political spectrum.

FvD’s party programme will remain ‘leading’, Van Haga said. He has taken the decision to leave, he said, because of a difference of opinion in the way politics should be practiced.

Divisions between Van Haga and Baudet have become more apparent in recent weeks and insiders said that it was only a matter of time before the party broke up.

Earlier this month, Van Haga criticized Baudet’s controversial pastiche of the May 5 Liberation Day poster and on Wednesday he apologised to D66 MP Jan Paternotte on behalf of Baudet, who had patted him on the back.

Van Haga was one of the few FvD supporter to remain loyal to Baudet in the wake of December’s revelations about anti-Semitism within the party. He entered parliament as a VVD MP but was thrown out of the party after refusing to put his rental property business at arms length.

Smolders, once the driver for murdered far right politician Pim Fortuyn, told the Brabants Dagblad that the situation within the party had become ‘unworkable’.

‘We don’t want to be surprised by issues like the posters,’ he said. ‘We’ve tried to solve it internally but we have no confidence that we can constrain him [Baudet]. He does a lot of good things but he does not listen.’

Forum voor Democratie MPs have also been criticised for not taking the coronavirus regulations seriously and for endangering the health of parliamentary staff. On Wednesday, Baudet admitted he had been ill in bed with ‘corona flu or another flu’ but said he had not a test. ‘I feel right as rain,’ he said.