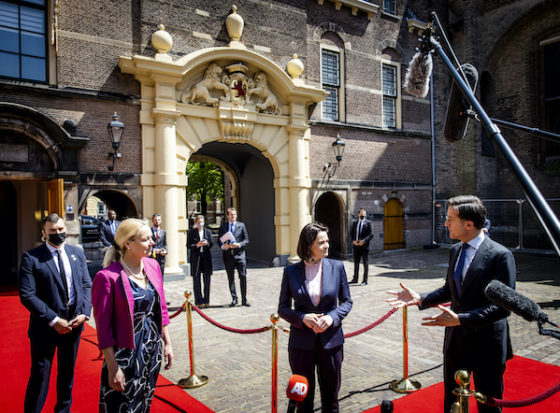 Belarus opposition leader Svetlana Tikhanovskaya was in The Hague on Friday afternoon for talks with prime minister Mark Rutte and foreign minister Sigrid Kaag, just days after Belarus kidnapped a leading activist by forcing a Ryanair plan to divert.

Tikhanovskaya, who claimed victory in last year’s Belarus elections, currently lives in the Lithuanian capital Vilnuis after being forced to flee shortly after the vote.

Sunday’s events show that ‘everyone is a target’, she told reporters at the parliamentary complex.

Tikhanovskaya called on Dutch MPs to back economic sanctions against Belarus. ‘It is always said that people suffer under sanctions, but people are suffering now,’ she said.

In particular, sanctions should target the petrochemicals, steel and timber industries she said. These, she said, are sectors are dominated by state companies which benefit regime leaders.

European leaders agreed on Monday to take action against Belarus, in what Rutte described as the fastest decision making he had ever seen by EU leaders.

Rutte told Tikhanovskaya that he promised he would see her again in Minsk, the Belarus capital. ‘I am a great admirer of what you are doing, at great personal risk’ Rutte said. ‘But it is crucial… and we will help and do whatever we can.’