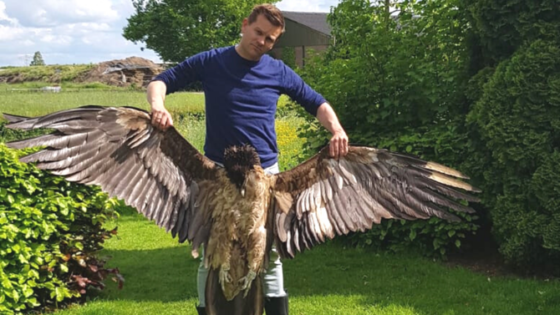 A bearded vulture which was part of a breeding programme to boost the population in Europe, has not survived an encounter with a wind turbine in Wieringerwerf.

Bearded vultures, whose wingspan can reach some three metres, are one of the largest birds in Europe. It is on the ‘near threatened’ list of the International Union for the Conservation of Nature which means it could face extinction in the future.

The animal in question, called Angèle, was released last year as part of a French reintroduction programme and was equipped with a tracking device which measured its location and speed. When the speed dropped Vulture Conservation Foundation president Hans Pohlmann, who had been following the animal’s progress from France, feared the worst, he told NH Nieuws.

‘We had seen it flying in between two turbines the day before and were afraid it might crash into one,’ Pohlmann said. ‘It’s a terrible shame and a big blow to the introduction programme. It was very upsetting to see it lying there.’

The Vulture Conservation Foundation has been involved in the reintroduction of the bearded vulture, or lammergeier, since 1986. ‘There were only some 70 pairs left in Europe in the1970s. There are some 1,300 bearded vultures in Europe now.’ Pohlmann said.

It is the first time a bearded vulture, which is only spotted some three times a year in the Netherlands, has flown into a wind turbine in this country.

‘But it won’t be the last,’ Pohlman said, ‘because their number is growing and so is the number of wind turbines, We know that bearded vultures are unable to change course at the last minute, so the turning blades are a big danger.’

The solution would be to equip the turbines with a system which stops the blades from turning when a big bird approaches. Some turbines in Zeeland already have that system in place and so do wind turbines in Portugal and Spain.’ We think all turbines should have it,’ he said.

The dead bird has been taken to Wageningen University & Research which will investigate if it was suffering from any underlying conditions.

The Natuurhistorisch Museum in Rotterdam has already put in a request with the university to include the animal in its collection but, surprisingly, not of animals which have met their deaths in an unusual way.

‘We just want it for our regular collection, but it is not clear yet if the animal will be kept and if our museum will be the one to get it if it is,’ curator Bram Langeveld told DutchNews.nl.