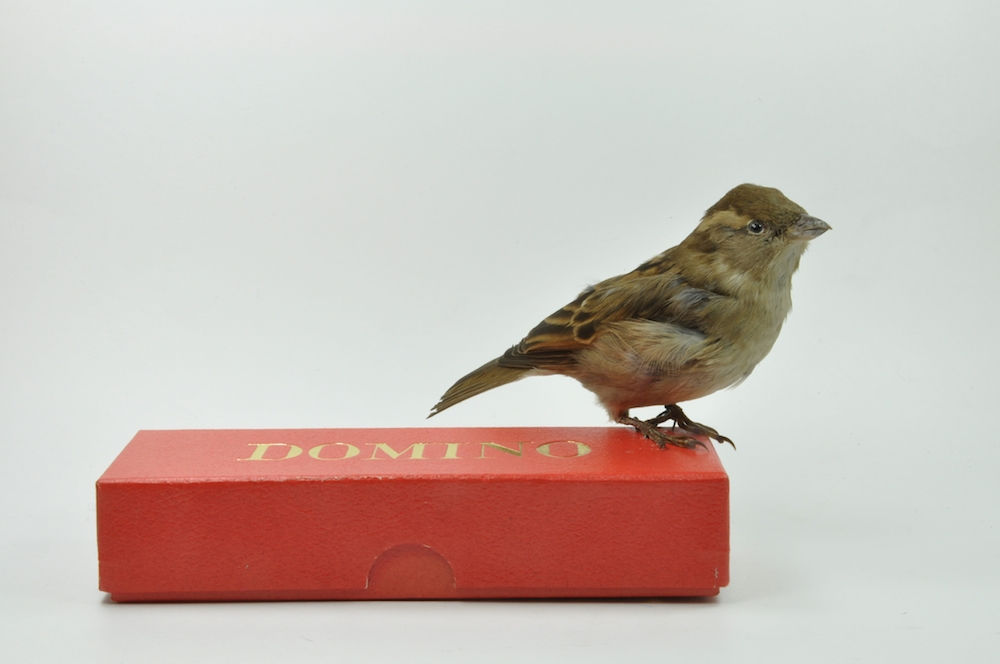 The Natuurhistorisch Museum  in Rotterdam is home to an extraordinary collection called ‘Dead animals with a story’. The stories of how the animals came to their sticky ends are told, very entertainingly, by curator Kees Moeliker who, as the following selection shows, has a particularly good nose for sniffing out a carcass.

The domino sparrow
Just when the organisers of an attempt to break the world domino toppling record had painstakingly placed four million tiles in the right place, a sparrow (Passer domesticus) decided to knock down some 23,000 to help them on their way. The sparrow, which was soon dubbed the Dominomus, was shot dead for its pains and became world famous.

The parliamentary mouse
Moeliker, reading about a plague of mice in Dutch parliamentary complex, started a quest for a dead mouse with a background in politics which, he said, would be just the thing for his collection. No-one would help him. Then, a package arrived. In it was a dead mouse still in the trap that killed it. ‘Here’s your parliamentary mouse’, the anonymous donor had written.

The crash gull
When the news came that a pilot had mended the window of his air ambulance helicopter with duct tape after a run in with a Croicocephalus ridibundus, or black-headed gull, so he could continue saving people, Moeliker’s thoughts naturally turned to the gull. After some detective work at the site of the accident the shattered bird was found.  Every bone in its body was broken but its skull and beak were unharmed. Could the helicopter have hit the gull instead of the gull flying headlong into the helicopter? A cold case if ever there was one.

The necrophiliac homosexual rapist duck
One day, when Moeliker was sitting in his office thinking about dead animals, he  heard a tremendous bang. A drake mallard (Anas Platyrhynchos) had crashed into his window with tremendous speed and was dead on impact. Next to the corpse was another mallard which proceeded to have sex with the dead bird for over an hour. An astounded and intrigued Moeliker took pictures (!) and found papers referring to a. homosexuality among ducks, b. necrophilia among ducks and c. rape among ducks. But this was the first time one duck combined all three. He is not in the collection though. It was the duck that died.

(Perhaps) the last crab louse
In 2007 Moeliker, worried the crab louse, or Phthirus pubis, would be extinct before he could secure one for his collection, decided to ask those who still sport pubic hair to have a good rummage and send him one. In fact, he was offered several, anonymously of course, so unfortunately the former habitat and story of these particular dead animals remain unknown. No picture is available of a dead crab louse. It does not photograph well. 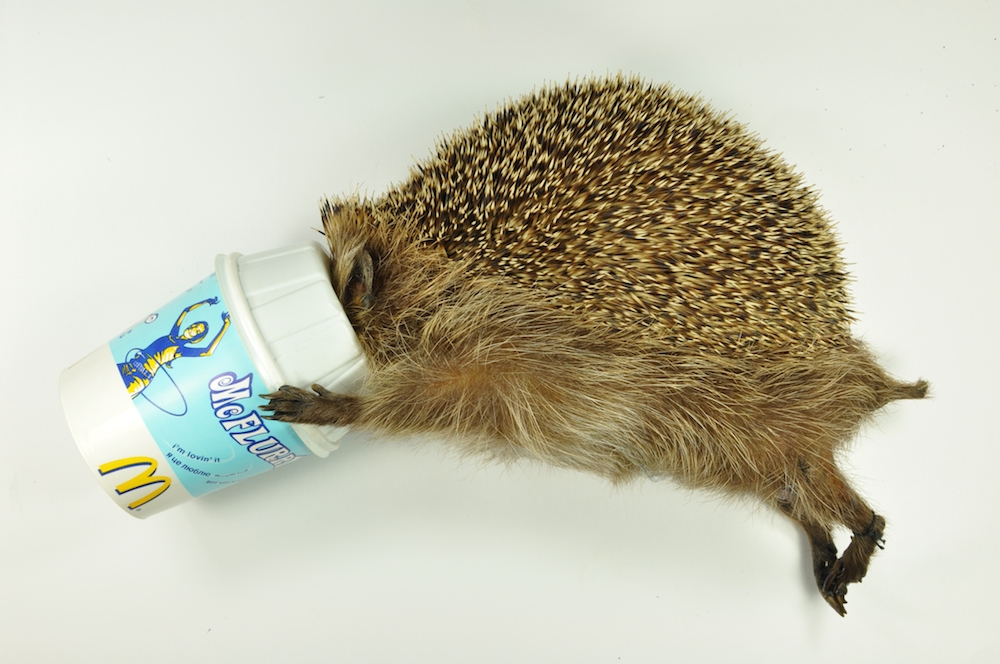 The McFlurry hedgehog
People love McFlurry ice cream (indeed Moeliker says he’s a fan) but unfortunately so do hedgehogs. Carelessly discarded beakers are left where hedgehogs with a sweet tooth can get at them. In an effort to get at the last bit of sweetness the hedgehogs get their spines caught behind a plastic ring and can’t get out. The result is death by starvation. Moeliker has a dead hedgehog in his collection (with the killer beaker on its head) but the good news is that McFlurry ice cream beakers now come with smaller plastic rings.

The Frühstück bat
To give the collection that prestigious international flavour, Moeliker has been very happy to include the German breakfast bat (Pipistrellis pipistrellis). In 2012 its perfectly mummified remains were found in a packet of ‘wholemeal Mini Zimties’ breakfast cereals where they must have given the drowsy consumer quite a shock. How had it got there? The authorities which whisked the Zimties away for further investigation found bat poo as well, which suggested the bat had got into the packet when it had been opened, and left, by the owner. Obviously the bat didn’t thrive on the stuff, wholemeal or not.

The fish that got stuck
Put together A Fish called Wanda, lots of beer and an aquarium and a trip to the hospital to dislodge an armoured catfish (Corydoras aeneus) can’t be far off. The 28 year-old (!) fish swallower did not know the catfish puts up its spines when caught in awkward situations like these but soon found out. The doctors couldn’t save him – the fish that is. The man, who ended up with a very sore throat, shamefacedly agreed to give Moeliker the fish on condition he remain anonymous. 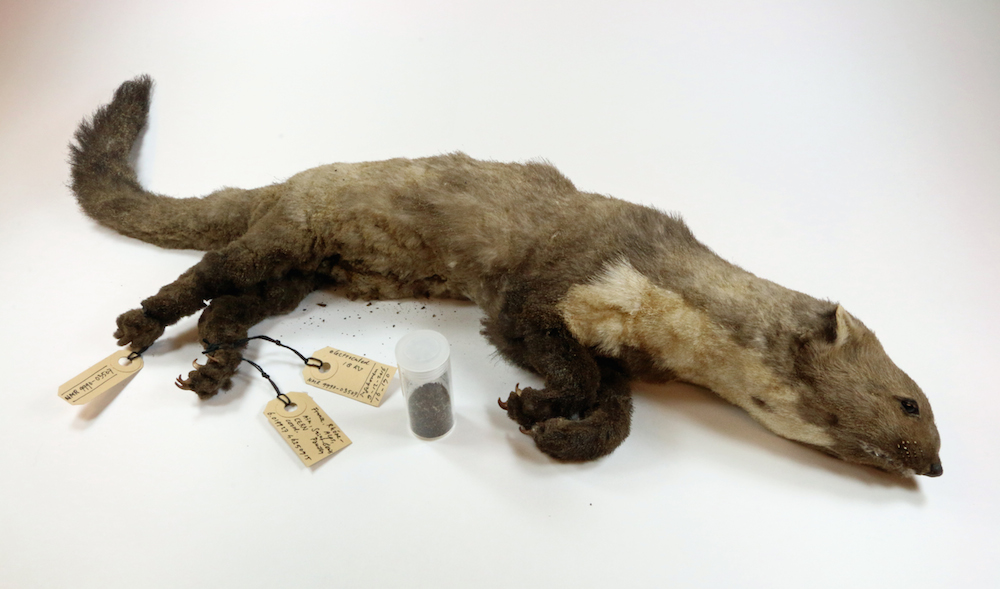 The Cern Stone marten
Last but by no means least is the collection’s latest addition: the Cern stone marten. In 2016 the Cern particle accelerator near Geneva shuddered to a halt, causing the scientists present to scratch their heads. A stone marten had caused a short circuit in an above-ground distribution centre and had, in the process, been electrocuted himself. Moeliker tried to get the animal for his collection but it had been destroyed as per the rules. When it happened again he did get his hands on the animal and gave it pride of place.

Extra time: Treijtel’s gull
This is one we think Moeliker would probably kill for. On November 15, 1970 Eddie Treijtel, goalkeeper at Feyenoord, was trying to keep Sparta at bay and gave the ball a tremendous wallop, hitting a gull in the process. Treijtel had a very successful career as a goalie but is very much remembered for the gull incident. Both Sparta and Feyenoord claim to have the gull in their museums. Moeliker thinks it is with Sparta as the Feyenoord gull is of a species that only frequents the Kuip football stadium and its surroundings in spring.

The cat that became a handbag

In 2003 artist Tinkebell strangled her deadly ill cat Pinkeltje and used his skin to make a handbag. She buried the rest of the cat in the garden and when she moved she dug him up again to give to the museum. Tinkebell wanted to highlight the ‘whishy washy’ way people treat animals.