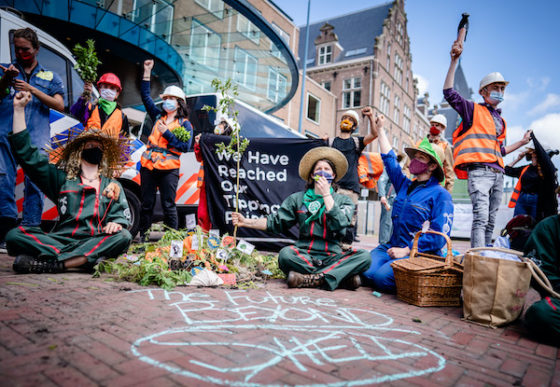 Some 30% of Shell shareholders have backed a motion by campaign group Follow This at Tuesday’s AGM, calling on the oil and gas giant to draw up a more ambitious plan to help meet Paris agreement climate targets.

Shell management again urged shareholders not to support the campaign group, led by former journalist Mark van Baal, which has been arguing for a change of approach since 2016.

That year just 2.6% of Shell shareholders supported the motion, last year 14.4%. This year the total is more than double, with new backing from weighty shareholders such as Dutch healthcare pension fund PFZW.

PFZW chairwoman Joanne Kellermann told NRC earlier this week that PFZW supports Shell’s goal of zero carbon emissions by 2050 but not the means to get there, much of which will be achieved by planting forests to compensate for carbon emissions elsewhere.

Read our interview with Mark van Baal of Follow This

Shell’s own motion, calling on shareholders to support its strategy, was supported by 80% of shareholders.

‘This year for the first time, Shell put forward its own climate plan for a vote – and yet again, shareholders are sending a strong signal that Shell will have to set new targets,’ Van Baal said. ‘Shell’s policy falls short of what is needed to protect investors from devastating climate change.’

Dutch civil service pension fund APG, one of the biggest funds in the world, voted against the Follow This motion.

Earlier this month, 58% of shareholders in ConocoPhillips voted in favour of the Follow This climate resolution – the first majority vote in any jurisdiction, the campaign group said.