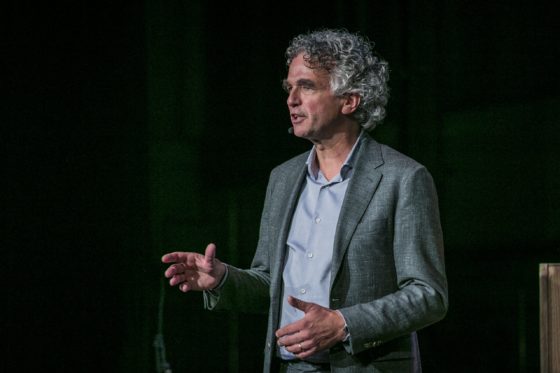 Follow This founder Mark van Baal at the Patagonia action works conference in Berlin in 2019. Photo: Pascal Rohe for Follow This

On Tuesday, at Royal Dutch Shell’s AGM in The Hague, one man − supported by a growing army of shareholders − will tackle Europe’s highest grossing company from within when he seeks approval for a resolution, opposed by directors, for a speedier and more ambitious transition to green energy.

If the planet survives to tell the tale, Dutch national Mark van Baal might one day be remembered as the man who had the greatest impact on reversing climate change.

The former energy journalist’s draft novel about a CEO of an oil firm changing the course of history by steering the company towards renewables struck a duff note, but sparked the idea for Follow This, a movement he founded in 2015 based on shareholder activism within some of the world’s most polluting companies, including Chevron, Royal Dutch Shell and BP.

Striking at the top

‘The oil industry can make or break the Paris Agreement,’ says Van Baal (52), who believes striking at the heart of pollution powerhouses is the most effective way to reverse climate change. Follow This’s counter-intuitive approach invites changemakers to buy a share in Big Oil (from €9) via their website and then send an email to the CEO, introducing themselves as their newest shareholder and pledging their support to help them make the switch to green energy.

Inspired by TCI − who in 2007, with a mere 1% stake in ABN Amro, got the backing of shareholders to split the bank into three parts − Van Baal saw an opportunity to significantly reduce global emissions by building shareholder support for green resolutions in our most polluting corporations, while garnering media interest.

His strategy to take on multinationals from the grassroots raised a few eyebrows and was widely dismissed as ‘a sympathetic initiative’. But when his wife showed him a viral video of a lone dancer in a park evolving into a huge dance party, he recognised such doubt and derision as part of the journey to success, and the name ‘Follow This’ was born.

‘One of the lessons [I learnt],’ he says, ‘is that to get something like this off the ground, you just have to do it and run the risk of being ridiculed in the beginning.’ 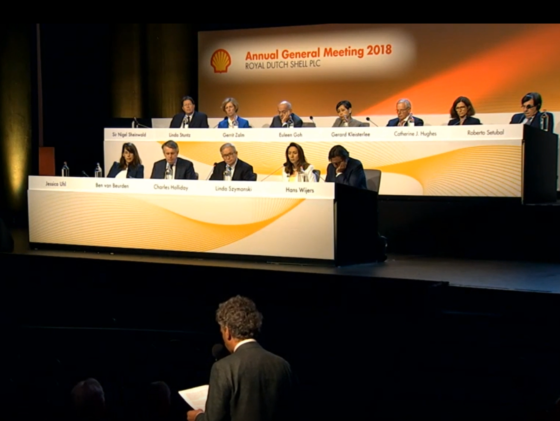 Follow This founder Mark van Baal addresses the board of directors at the Shell AGM in The Hague in 2018. Photo: Follow This

Big in ambition, but small in stature, he cut a lonely figure when he rose nervously from a seat at the back of Shell’s packed AGM in 2015 and introduced himself to CEO Ben van Beurden, telling him: ‘I believe you can change the world.’

A David squaring up to Goliath, he urged the panel of directors not to devalue shareholders’ investments by making Shell ‘the next Kodak’, and ‘to put their brains and their billions behind renewable energy’ instead.

‘We are not asking you to stop paying dividends. I would be lynched in this place,’ Van Baal tells the room with a smile, stressing the strong business case for the transition (fossil fuels are becoming scarcer and more expensive to extract, while renewables are falling in price). And when told the transition is harder than he thinks, he quips: ‘We have more confidence in you than you have in yourself, apparently.’

As for confidence in Follow This, support was snowballing, bolstered by deep-pocketed investors with a green agenda and the backing of key players such as environment minister Stientje van Veldhoven, and Jan Rotmans, the founder of Urgenda, who in 2015 won a landmark case ruling that the Dutch government had a legal responsibility to act immediately to reverse climate change. Today, over 6000 individuals have donated a total of around €20m in shares to the cause.

‘It’s amazing how many people want to contribute to this,’ says Van Baal, who believes solar panels, vegetarianism and not flying are all very well, but are not enough to stop global warming. ‘People feel pretty powerless against climate change. They thought: this can make a difference.’ 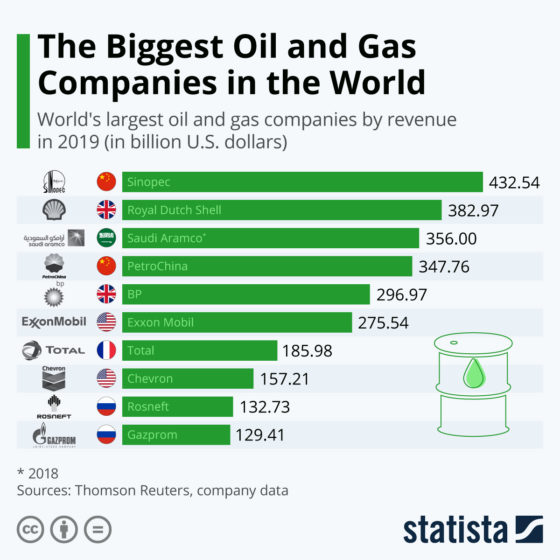 It takes guts, but engaging with Big Oil may be our best hope of keeping temperature rises to below 2 degrees as the burning of fossil fuels accounts for 87% of the world’s CO2 emissions.

Research undertaken by the Climate Accountability Institute ranked Shell the 7th highest polluting company in 2019. A ruling is due later this month for a case brought against them by Milieudefensie for violating Dutch liability law by producing double the Netherlands’ legal limit of carbon emissions.

In the Netherlands, greenhouse gas emissions per capita are still 34% above the EU average due to our reliance on fossil fuel. In 2019, just 8.8% of the energy used in the Netherlands was sustainably sourced, one of the lowest in the EU. Iceland, by contrast, was powered by 78% renewables.

‘The fossil fuel interests are very big in the Netherlands,’ says Van Baal. ‘The story was always that we have so much natural gas in the north of the Netherlands that the government is dependent on it so we can’t change it so fast. Now, because of the earthquakes in Groningen, now suddenly it’s possible to do without the income.’ 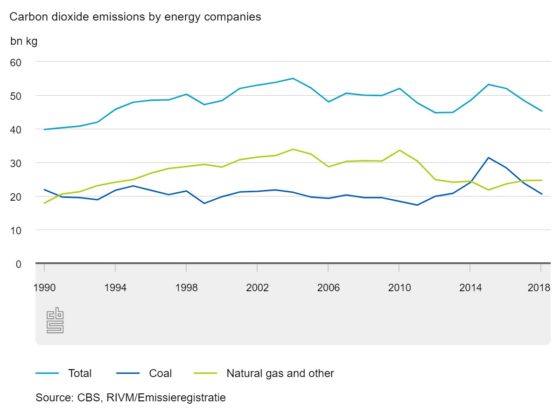 Carbon dioxide emissions in the Netherlands are gradually declining but our dependence on fossil fuels, say environmentalists, limits our progress. Source: CBS

Dutch lawmakers have also tightened their grip on shareholder activists like Follow This, who now require a 5% stake to table motions in the Netherlands.

Of course, Big Oil does not always appreciate being told home truths about an industry which has − until recently − served investors so well. The atmosphere at some AGMs has been hostile at times, with Van Beurden accusing Van Baal of trying to take leadership at Shell’s 2018 AGM. Follow This, he reminds him with headmasterly authority, must ‘Follow us’.

And sometimes the pressure group itself can inadvertently hinder progress. Campaigns without ambitious, concrete targets can end up functioning as fig leaves for CEOs, says Van Baal, citing Climate Action 100+’s softly-softly approach as an example.

Despite the challenges, Follow This’s impressive results suggest that the method is working. The inclusion of Scope 3 emissions in Shell’s 2017 climate targets, for example, was an unanticipated success which Van Baal says still gives him goosebumps.

Creating traction in the US has been harder, but just last week, a record 58% of shareholder voters in Alaskan oil giant ConocoPhillips supported a motion brought by Follow This to reduce all of the company’s direct and indirect emissions – a huge endorsement for the resolution, whose equivalent at Shell has taken five years to creep from 2.7% to 14.4% of voters.

Citing the risk of litigation that polluters now run, as well as the prospect that fossil fuel projects become ‘stranded assets’ in a fast-changing energy landscape, the motion marked a turning point in North American big oil, which, since Biden, has seen the Securities and Exchange Commission grant greater freedom to shareholders to make climate proposals. 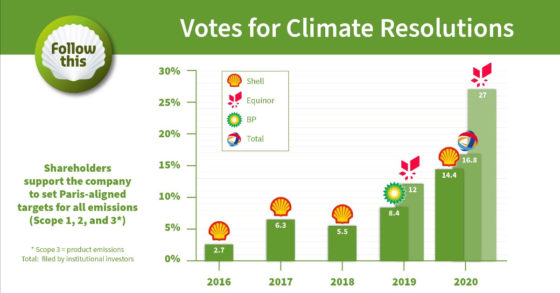 Whether the scales will also tip at Shell on Tuesday, remains to be seen. Shell has written to all shareholders advising them to support the directors’ climate resolution over Follow This’s more ambitious alternative.

Though Shell asserts that its carbon production peaked in 2018, the company’s 2030 targets, say Follow This, still fall short of the Paris Agreement, and the rising demand for energy is being met by further oil exploration in the Arctic with no more than 1% of revenue invested in renewables.

Whatever happens, Big Oil − believes Van Baal − will in time burn itself out. ‘If we leave them alone, they will eventually go bankrupt, but it will take too long. It will put too much CO2 in the air,’ he says.

And, despite some harsh criticism from his wife, he still thinks his novel is a good read and that the plot is realistic. ‘I’m quite optimistic, but I have to be,’ he says. ‘This is the only thing that’s going to work.’