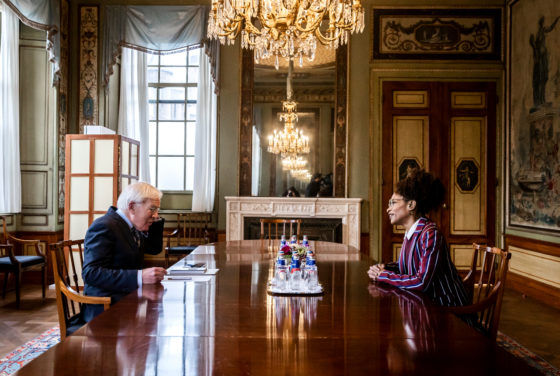 Exploratory talks to form the next Dutch government are restarting on Thursday after a two-week delay caused by a row over an accidentally leaked memo.

Caretaker prime minister Mark Rutte and leader of the right-wing liberal VVD will be the last person in the door on Friday.

Tjeenk Willink told a press conference on Wednesday that he sees his task as identifying the barriers to trust between parties and how they can be removed so that a new coalition can be formed. He stressed he was not interested in discussing the fate of individual politicians.

He said the next government should not be bound by a tightly drafted coalition agreement, which diminishes parliament’s ability to scrutinise and influence its policies. ‘It disturbs the balance of power and makes the opposition redundant,’ he told a press conference on Wednesday.

The 79-year-old was appointed on Tuesday following the resignation of two sets of parliamentary scouts who were supposed to represent the interests of the VVD and D66, the parties expected to form the backbone of the new coalition.

The talks unravelled in the first week when D66 negotiator Kajsa Ollongren accidentally exposed her briefing notes to cameras as she dashed out of the parliament building after being notified of a positive coronavirus test.

The notes included a line suggesting Christian Democrat (CDA) MP Pieter Omtzigt should be given a ‘role elsewhere’, which was eventually traced to Rutte. The prime minister then narrowly survived a vote of no confidence as MPs said his inability to remember discussing Omtzigt had undermined his credibility.

This week, however, Rutte seems back on course to lead a fourth government after his VVD party lined up behind him. As the largest group in parliament with 34 seats, the VVD is seen as indispensable in a coalition which will need at least four parties for a majority.

D66 leader Sigrid Kaag indicated that she was prepared to give the prime minister a chance, a week after saying she would have resigned in his position. She said the talks would start again from scratch with ‘no expectations’, adding: ‘It is up to Mr Rutte to outline how he is going to repair the breach of trust.’

The next coalition will also have to make tough policy choices as the country emerges from the coronavirus pandemic, with the environmental planning agency (PBL) calling for wide-ranging reforms to correct years of delay and neglect.

As well as the threat of climate change, the Netherlands is suffering from a housing shortage and the urgent need to restructure the agriculture sector so farmers can have clarity about their future.

A million houses need to be built by 2030 to relieve pressure on the western cities and growth spots such as Zwolle and Nijmegen. In other areas where the population is declining land use needs to be diversified as farming is scaled back to make space for renewable energy and recreation.

‘We need to build quickly, but above all carefully,’ David Hamers of the PBL told the Volkskrant. ‘It’s not just about building houses. Living and working need to be combined.

‘The debate right now is mainly around the question of whether to build new homes in the city or turn fields into suburbs. That’s a false distinction. The need is so great and the demand is so diverse that we need to do both.’