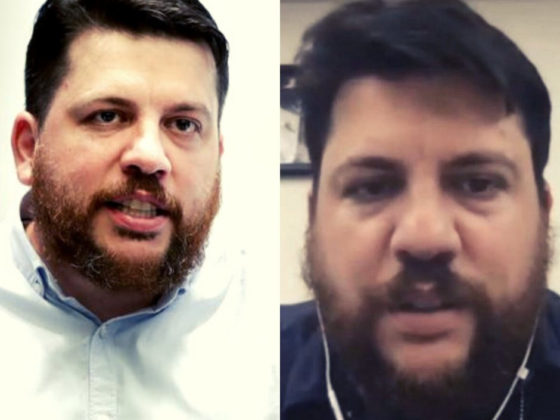 The real Leonid Volkov (l) and a screengrab of the fake one (r). Photo: Rihards Kols via Twitter.

The Kremlin was probably behind the ‘deepfake’ used to trick Dutch politicians into believing they were holding a meeting with Russian opposition leader Alexei Navalny’s campaign chief, the real aide has told NOS.

A group of MPs took part in a Zoom conference with a man who they believed to be Leonid Volkov, the chief of staff for the jailed Russian opposition leader, last week. In fact they were talking to an impersonator using image manipulation to pass off as Volkov.

Some Dutch media reported that the MPs were the victims of a hoax by Russian ‘pranksters’, but the real Volkov said the technique was a deliberate ploy by Vladimir Putin’s government to discredit European politicians.

The same tactic was used to trick a group of Estonian MPs and Tom Tugendhat, chair of the UK parliament’s foreign affairs select committee, into believing they were speaking to Volkov while he was visiting Lithuania.

Putin’s Kremlin is so weak and frightened of the strength of @navalny they’re conducting fake meetings to discredit the Navalny team. They got through to me today. They won’t broadcast the bits where I call Putin a murderer and thief, so I’ll put it here.

‘We call them pranksters, but we’re talking about well-paid employees of the Russian government,’ the actual Volkov told NOS. ‘It’s more serious than it looks.’

Volkov said European politicians needed to be aware of the risk of deepfakes and verify the identity of people who approach them. ‘Zoom has been a lifeline during the pandemic, but the Kremlin is using it as a weapon.’

None of the participants had carried out basic checks such as contacting him on social media or looking up his email address online, he pointed out.

‘The Dutch ambassador to Lithuania called me to ask me if I was talking to the Dutch parliament,’ Volkov said. ‘They were already a bit suspicious about this incident and so the truth came out.’

During the interview Volkov demonstrated a number of techniques to help unmask a deepfake, such as asking an interviewee to touch and pull at their face or turn round to show the back of their head. The interview was monitored by a deepfake expert to check that the person NOS was speaking to was the real Volkov.

‘I expected the level of preparedness of European colleagues to be better,’ he said. ‘But if at the end of the day, everyone becomes more aware of the new techniques of the Kremlin in the disinformation war, the final outcome of this story will be positive.’