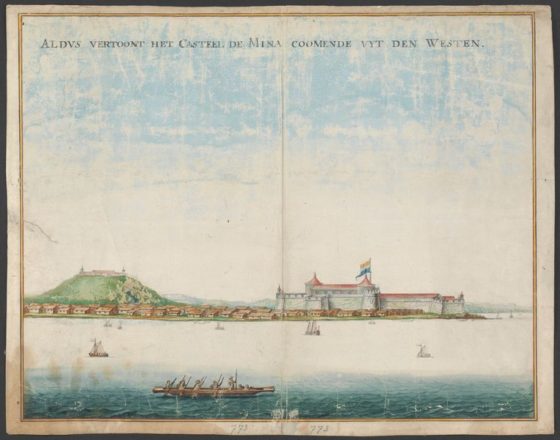 The D’Elmina castle in the 17th century. Illustration: National Archive

The Dutch national archive has put almost two million documents and drawings online which relate to the Netherlands’ slavery past after an eight-year project to preserve and digitalise them.

The documents cover a variety of companies involved in the slave trade and include lost documents about Fort Elmina on the coast of what is now Ghana, which was a central point in the trade of enslaved peoples.

Part of this archive resurfaced in London during the digitalization process. The documents were part of the Prize Papers, thousands of documents stolen by the English navy privateers from Dutch ships between 1652 and 1815. Other documents in the collection come from Guyana and Suriname.

The documents include ship’s logs, cargo lists, accounts and letters and much of it has never been researched before, historian Leo Balai told the Volkskrant.

The collection is not yet complete and work will now start on adding documents from the Antillean islands and from Rotterdam’s own city archive.

In August last year, the national archive is putting the names of 21,000 people who lived as slaves in the former Dutch colony of Curaçao online, enabling their descendants to find out about their ancestors. The Suriname slave registers were digitised in 2018.

National archive chief Johan van Langen said the documents give more context to the registers already online. ‘The stories and drawings give an extra layer,’ he said.