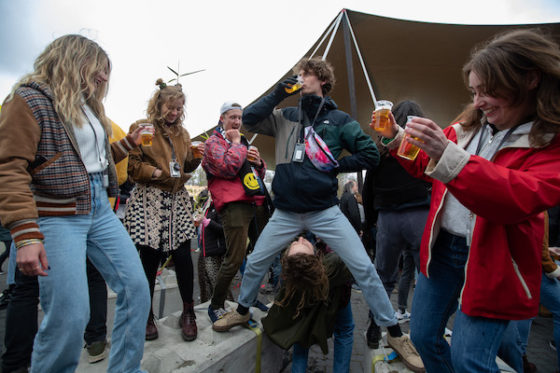 The Netherlands may be averaging more than 7,500 cases of coronavirus a day, but moves are already being made to get society back to normal. A series of ‘experiments’ to organise coronavirus-safe events has been heavily criticised in some quarters, but the government says they will provide valuable information. Here’s a breakdown.

The Fieldlab events are being organised by the Dutch events industry on behalf of the government. It has already run a few pilots – including a conference in Utrecht and a small festival on the Lowlands grounds in Biddinghuizen – and has 11 more items in the pipeline.

These include a one-day opening for 8,000 people at the Efteling amusement park (which will be partly closed to enforce queuing), the Enschede marathon and an overnight festival in May. Two concerts for 10,000 people have been scrapped from the list following widespread criticism.

The aim of these events is to ‘show how different events can be safely and responsibly organised in the future’, according to the government’s own website.

Fieldlabs is sponsored by four different ministries and the events are being organised by the Dutch events sector. The Fieldlabs project has cost €2.7m so far, head researcher Andreas Voss told broadcaster NOS.

Those wanting to attend a Fieldlab event must have a negative PCR coronavirus test no older than 40 hours. Participants are also supposed to test again five days after the event but this is not compulsory. Children under 12 do not have to take a test but must be registered.

During the event, the participants are divided into groups and given different rules to follow while their behaviour is monitored. Some will not have to follow social distancing rules, while others may be allowed to take off their masks, for example.

This is a separate trial involving five cafes in Utrecht which took place earlier in April.

This experiment was sponsored by the economic affairs ministry, together with Utrecht’s regional health board and the hospitality industry.

The aim was to assess the behaviour of customers and staff and to see how well they keep to the social distancing rules. The result of that experiment will be published in around five weeks.

However, officials have said that eight people who booked tickets were banned from taking part because they tested positive for coronavirus and one visitor has since also tested positive.

In addition, police were called to one of the five cafes at 2.15am on the last night of the experiment because around 40 people – thought to be mainly staff from four of the five cafes – were having a noisy after-party.

Testen voor Toegang, or testing for admittance, is another set of ‘experiments’ featuring a wide range of cultural and other activities – some 450 events are listed on the government’s website. In total, 230,000 people are expected to attend them.

Some swimming pools will open, as will zoos, theatres and country houses. In the largest event, 7,500 fans will be able to watch Ajax take on AZ in the Eredivisie, in a match that could be the title clincher for Ajax.

Participants have to buy a ticket from the venue and have a negative coronavirus test from a special drop-in centre. These tests are currently – and controversially – being funded by the government.

The budget for the testing and the organisation is put at €1.1bn and is in the hands of new foundation Stichting Open Nederland, led by former armed forces chief Tom Middendorp.

It has given the contract for the April tests to a private company, without putting it out to public tender as is required by law. The lack of transparency was highlighted recently by investigative journalism website Follow the Money.

The government has also sanctioned two tests involving the travel industry to ‘find out if foreign holidays can be organized safely.’

The first is taking place on the Greek island of Rhodes and is for 189 tourists who have the Hotel Mitsis Grand Beach to themselves – apart from the staff. All the holidaymakers had to show a negative test result before boarding the plane and they are not allowed to leave the resort.

There was a coronavirus scare in the first few days of the trip, but eight people placed in quarantine as a precaution all tested negative.

A second trip, in which the holidaymakers will have more freedom, will take place in May on Gran Canaria. Some 45,000 people applied for one of the tickets when booking opened on Monday morning.

The government’s Outbreak Management Team (OMT), supported by a number of virologists, has warned that there are too many events and that fast tests are not always reliable, which may precipitate further outbreaks.

Questions have also been raised about the aim of the tests and what exactly is being researched, given few results have been published so far.

Some 350,000 people, for example, supported a petition drawn up by local hospital workers to have the Radio 538 event in Breda cancelled. They say it is a ‘slap in the face’ for healthcare workers and could lead to a surge in new coronavirus cases. In the end, Breda council decided not to give the event a permit.

Some MPs are also furious about the plans to allow casinos and arcades to take part in the Testen voor Toegang experiments. ‘Opening 27 casinos for 11,000 people is not a test, but a successful lobby,’ ChristenUnie party leader Gert-Jan Segers said. He is planning to force a vote on the issue on Tuesday.

Note: This article was updated on April 20 to reflect overnight news