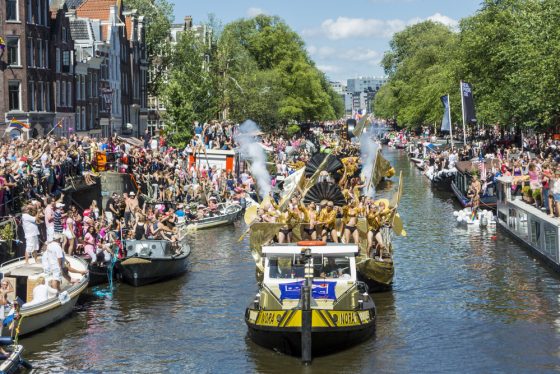 A 32-year-old man from Amsterdam has been sentenced to five months in jail to be followed by compulsory psychiatric treatment for making threats against gay people, Jews and the police on social media but was found not guilty of planning a terrorist attack.

The prosecution had said Tahsin E was planning to carry out a terrorist attack on last summer’s Gay Pride boat parade, and had undergone ‘terrorism training’. But judges ruled they were not convinced Tahsin E actually had terrorist intent or that he had taken part in a training exercise.

Police were alerted to E’s plans by the Dutch security service AIVD and the FBI last year and he was arrested on August 7. A search of his home in Amsterdam turned up several telephones, a quantity of hydrogen peroxide and injection needles.

The phones contained photos and videos featuring weapons and IS propaganda. E also asked on Twitter if anyone had a Kalashnikov rifle for sale, as he ‘needed it for the Gay Pride parade.’

Behavioural experts said the man has autism and is not fully responsible for his actions. He himself denied being radicalized and said the social media threats were simply meant to provoke, as an outlet for his frustrations.