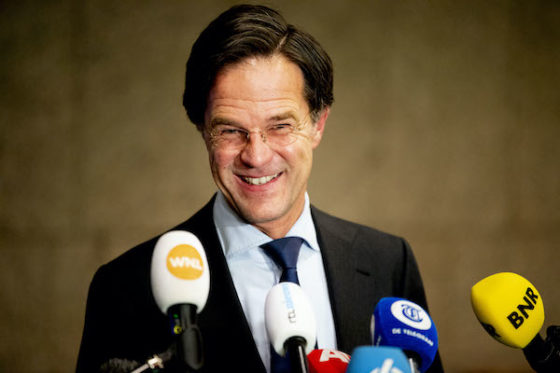 The new cabinet has its work cut out to get the Netherlands through the coronavirus crisis and then to restart the economy, VVD leader Mark Rutte said after his party emerged as the biggest in the general election.

Despite the coronavirus crisis, turnout is expected to be slightly up on 2017, at almost 83%.

The high turnout, and size of the ballot papers – with 37 parties – meant that results were slow to come through. By midnight, just a handful of results had been finalised, with the Wadden Sea island of Schiermonnikoog first to declare.

Nevertheless, the exit poll makes it clear Rutte is set to serve as prime minister for a fourth term, and is likely to work again with D66, which emerged as the big winner of the night, adding eight seats to take 27 – if the poll is accurate.

‘I think everyone wants a new cabinet as quickly as possible,’ Rutte said. ‘We’re in the middle of a very serious crisis and we’ll do our best.’

‘The programme for the months ahead is huge. We need to lead the Netherlands through the current crisis with the present cabinet and make a fresh start as a country,’ he said.

The Christian Democrats lost support as did the fourth and minor coalition party ChristenUnie. However, the four coalition parties would have a clear majority in the lower house of parliament if they decided to work together again.

But despite the increase in support for the FvD, staunchly pro-European parties made bigger gains than those which back a Nexit. D66 and pan-European newcomer Volt added around 11 seats between them, while the anti-EU PVV and FvD added three.

The exit poll also shows that the decline in support for traditional left-wing parties is continuing. The PvdA, GroenLinks and SP have just 25 seats between them, or  one sixth of the vote. In 2010, when Rutte won for the first time, the three bigger left-wing parties won 65 seats.

By contrast, the three far right parties – PVV, FvD and JA21 – are likely to win 28 seats in the 150 seat parliament, the exit poll shows.

SP leader Lilian Marijnissen told NOS after the second exit poll was published: ‘It’s a disappointment. We expected more, but the country has chosen. My feeling is that the coronavirus crisis was a very dominant factor. The voters chose the government parties and it was hard for us to go out and campaign on the streets.’

GroenLinks leader Jesse Klaver, who is projected to lose six seats and take just eight, said the results are ‘painful’.

‘GroenLinks has won in several elections in a row, so now we have to get used to losing and congratulating the winners. Sigrid Kaag has had a fantastic campaign, but we also congratulate the VVD.’

Sylvana Simons, the former television presenter turned politician who leads debutant BIJ1, told NOS: ‘The fact that we’re going into parliament now shows people need a politics of equality and to deal with the ever growing gulf of inequality in this country, not just economic inequality but also racism, sexism and discrimination.’