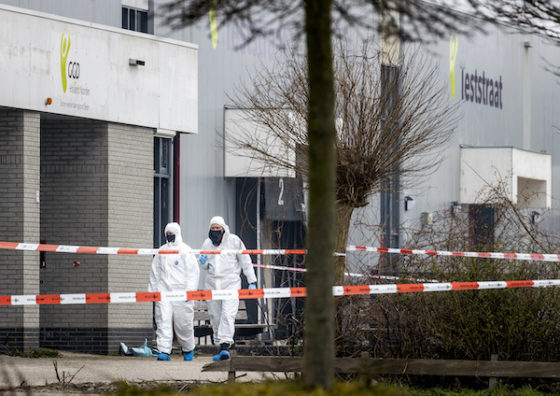 Forensic experts at the scene of the blast. Photo: Koen van Weel ANP

‘That health board staff who are working hard to keep us safe, and protect this country against coronavirus, should be targeted is terrible, really scandalous,’ Rutte told reporters.

The explosion happened shortly before 7am in the town of Bovenkarspel. One security guard was on duty at the time but was not injured. Several windows were broken by the blast.

Broadcaster NOS said a metal pipe exploded outside the building on the Middenweg, but this has not been confirmed. The area remains sealed off while explosives experts check to make sure the location is safe.

Other ministers and politicians too were quick to condemn the act. ‘We’ve been leaning on frontline staff heavily for a year and then we get this,’ said health minister Hugo de Jonge.

This has an impact on all of us, said regional health board chairman André Rouvoet. It was a ‘cowardly act’, he said.

The number of positive test results in the Bovenkarspel region has been rising sharply for several days, particularly in nearby Hoorn. Hoorn is now fourth in the list of towns and cities with the most infections per head of the population.

Windows were also smashed at test centres in Amsterdam and in Urmond in Limburg in December.