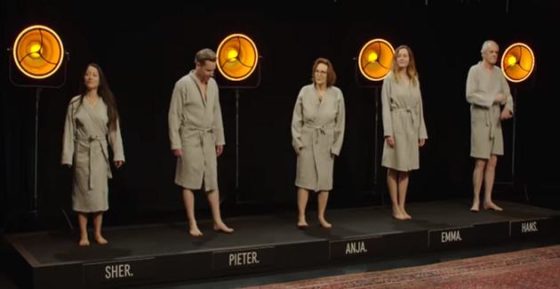 A still from the programme, before the participants disrobe

A children’s television programme to promote body positivity, and which features naked adults answering kids’ questions, has become controversial before it has even aired, with politicians joining in the fray.

The programme is based on the Danish Ultra smider tøjet (Ultra strips down) which is now in its second season.

The show, called Gewoon Bloot (simply naked) in the Netherlands, consists of a number of adults of all shapes and sizes answering questions from children aged 10 to12 on subjects like being ashamed of certain body parts or shaving versus waxing.

Social media have shown reactions from ‘disgusting to ‘educational’ and politicians too have been vocal.

Kees van der Staaij, leader of fundamentalist Protestant party SGP, said ‘Gewoon Bloot is not normal and shouldn’t become normal’ and announced his party would be bringing the issue up in parliament.

In Denmark too the far right have condemned the series with a leading member of the right-wing Danish People’s Party, Peter Skaarup, saying he found Ultra Strips Down to be ‘depraving our children’. However, the series is a success and in 2019 won an award for the best children’s programme at a Danish TV festival.

Reactions from Dutch children who had a preview of the show varied from ‘this is not a show I need to see’ to ‘it’s good to know that other people worry about the same things too’ and ‘it felt a bit uncomfortable at first’.

A more realistic view of bodies promotes a more positive self-image, presenter Edson da Graça  said. ‘The aim is to teach children that each and every body is different and that not all bodies are perfect’, he told  broadcaster NOS.

Elsbeth Reitzema from the Rutgers sexual health foundation, which helped develop the series, said the photoshopped or semi pornographic images children see every day on tv and the internet distorted reality and that the programme could be a good way for parents to broach the subject with their children.

NTR, the public television station which will broadcast the show, said the show had been ‘very carefully produced’.

‘The children knew exactly what was going to happen and they could say how they felt during the programme at any time. (..) We had expected a bit of a ruckus. Not everyone will think this is for children and that’s ok. It’s up to the parents to decide if their children can watch,’ the spokesman said.

The first Dutch sex education tv programme to feature nudity was Open en bloot, which was broadcast in 1974. Dokter Corrie, in 2013 and 2015, also led to questions in parliament.

The first episode of Gewoon Bloot will be broadcast on March 21 by NTR.