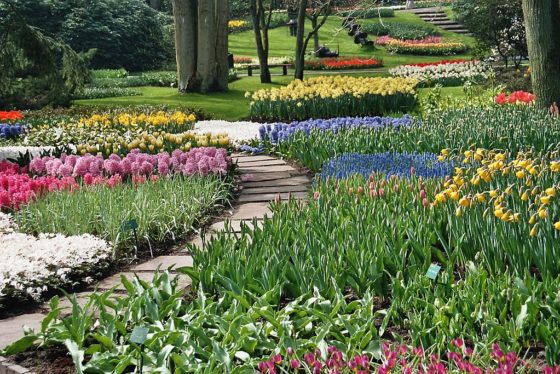 The Keukenhof is close by if you visit in the spring. Photo: Dguendel via Wikimedia Commons

For the second year in a row, the Keukenhof flower gardens are closed to the public, and are welcoming the public online instead.

Bart Siemerik, managing director of the Keukenhof, has mixed feelings when he walks through the park these days. ‘It makes you happy because all the flowers are there, and it makes you sad because you know you can’t share it with others,’ he says.

Unable to open already last year, the Keukenhof had prepared in the hope that its 2021 season would look different: visitors had to buy their tickets online for specific time slots in advance, with only a limited number of people allowed to enter for each slot. Pavilions, restaurants and flower shops had been closed, and mechanical turnstiles with ticket readers had replaced the receptionists.

However, on March 10, the park announced that it would be unable to open yet again, and its season kicked off online this week instead. ‘Like last year, we’ll bring Keukenhof home to people,’ Siemerik says.

To do this, two short films will be uploaded to Keukenhof’s website and social media platforms every week, showcasing its colourful grounds. ‘Of course, it’s only second best,’ Siemerik admits. ‘You cannot bring the smell of the hyacinths to the people at home. But it’s better than doing nothing. The flowers are there – they are not affected by Covid.’

Like last year, the director plans to do live streams in April when the park is at its peak, doing live commentary about what he sees and answering questions. The Keukenhof reached nearly 24 million people all over the world online in 2020.


While parks all over the country remain open, the 32 hectare Keukenhof falls under different regulations. Nor can the park claim full government support to help shore up its income because of its business structure, Siemerik says.

Most of the Dutch government’s Covid-19 support is based on a company’s previous earnings but as a non-commercial foundation, the Keukenhof only has eight weeks of income each year.

‘During the time where we don’t have any income, which is ten months a year, we cannot use the Dutch regulations. We have received a little support from the government, but it’s almost nothing compared to the loss that we suffered last year,’ Siemerik says.


Established 72 years ago, Keukenhof continues to be important not just for the Dutch tourism industry, but also for the horticultural sector and individual flower growers in the Netherlands.

It was originally created by a group of flower growers who used it as an exhibition to show their best products. ‘Today you would establish a web shop, but in 1949 there was of course no so such thing’, Siemerik says. To this day, the park still serves as an exhibition focus for 700 flower companies in the Netherlands.

Keukenhof alone suffered a loss of several million euros both last year and this year. ‘The park will survive, which is the good thing for us,’ Siemerik says. ‘But it will take many, many years before we are in a position to invest a lot of money in the park again.’