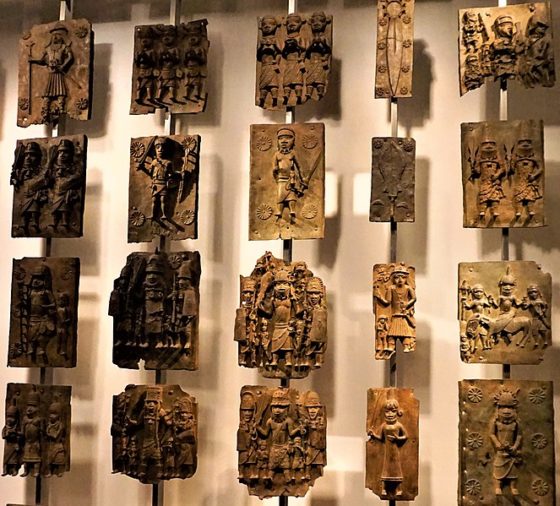 Benin Bronzes on display at the British Museum in London. Photo: Joyofmuseums via Wikimedia Commons

Dutch museums have at least 114 items stolen by British soldiers from the king’s palace in Benin City in 1897 in their collections, Trouw reported at the weekend.

The objects, known as the Benin Bronzes and including reliefs, statues and ivory artefacts, are now scattered around the world. Some are at the British Museum in London and the Metropolitan Museum of Art in New York, others are in private collections.

In the Netherlands, they are found in the Museum Volkenkunde in Leiden, the Tropenmuseum in Amsterdam, the Afrika Museum in Berg en Dal and Wereldmuseum in Rotterdam, Trouw said. The information comes from a report into the Benin Bronzes by the Wereldmuseum which is due to be published in the coming week.

Nigeria has been asking for the objects to be returned since independence in 1960 and the report gives sufficient grounds to talk about restitution, Henriette Lidchi, of the Museum van Wereldculturen, told the paper.

In October, the Dutch Council for Culture recommended that Dutch state museums returned stolen colonial art if requested, but it will be up to the next cabinet to decide how this should take place.

At the time, Stijn Schoonderwoerd, director of the National Museum of World Cultures, said he hoped the minister would accept the recommendation. Together the museums have some 270,000 objects in their collections.

In Britain, several regional museums have begun paving the way to return items which form part of the Benin Bronzes collection.

In January, Dutch magistrates fined five people from France and Belgium who took a statue from the Afrika Museum last year €250 each and sentenced them to suspended prison terms of one and two months.