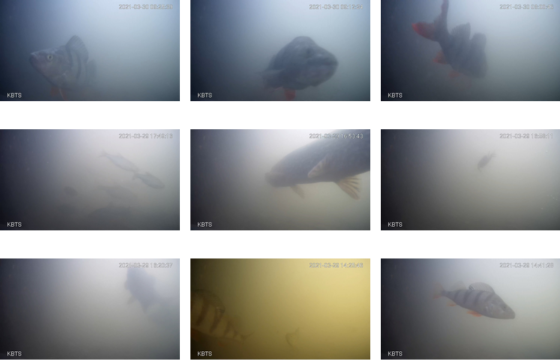 Fish caught on the webcam, waiting for the gate to open. Photos: Visdeurbel.nl

Fish and river crayfish passing through Utrecht have been given their own doorbell, so they can continue the trek to their spawning grounds without having to wait too long.

Thousands of fish make the journey upstream in the river Vecht each spring but because the gates of the Weerdsluis lock are not opened frequently enough, the fish are facing long waits in the city’s Oudegracht.

To remedy this, Utrecht local council and the local water authorities have installed a camera which will live stream the goings-on under water. ‘People who spot a waiting fish can ring the bell and that will alert the lock keeper. He receives screenshots of the fish and can then open the doors to let them through, ecologist Marc van Heukelum said.

The doors will not open for every single fish but the fish doorbell will mean more work, lock keeper Daniel Jansen told broadcaster NOS. ‘I think we will open the doors at least once a day,’ he said.

Van Heukelum said the live stream is a great opportunity to see what goes on under water. ‘The cool thing is that you can see the species of fish that swim here and help them on their way,’ he said.