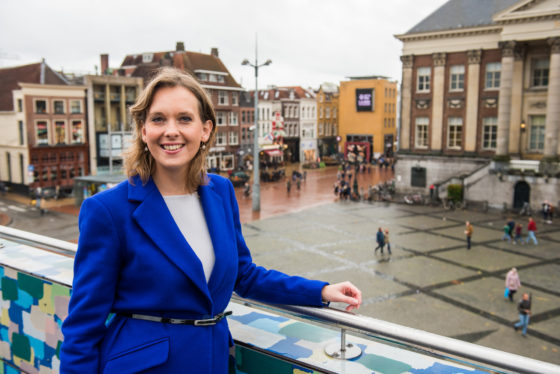 DutchNews.nl has been interviewing a number of prominent MPs about their party’s policies in the run-up to the general election. Today, Gordon Darroch talks to ChristenUnie hopeful Stieneke van der Graaf.

As the sixth-ranked candidate on her party’s list, Stieneke van der Graaf has a big stake in whether opinion polls predicting an extra seat for the ChristenUnie are borne out on Wednesday.

Appropriately for a confessional party, the smallest coalition partner has a faithful electorate that has voted in five MPs at each of the last three elections. Van der Graaf, 36, entered parliament when the party joined the coalition in October 2017 and Carola Schouten quit her seat to become agriculture minister.

The ChristenUnie is that quirk of the Dutch system, a party that does not exist to seek power but that represents a well defined niche electorate. It combines a more humanitarian, progressive strain of Christianity than the traditionalist Reformed Party (SGP), with a conservative stance on drugs and abortion.

‘[Party leader] Gert-Jan Segers once said at a conference, if you want our seats, you get our ideals,’ Van der Graaf explains. ‘It’s how we do our political work.’

The decision to go into coalition is a delicate one for a party with such firmly rooted principles. The talks to form the last cabinet almost collapsed over fundamental disagreements with the progressive liberal party D66 over its plans to legalise voluntary termination of life (‘voltooid leven’) for over-70s.

In the end D66 agreed to put that issue on hold, while the CU agreed not to stand in the way of embryo research. The CU also consented to an experiment to regulate the production of cannabis for sale in ‘coffeeshops’, despite its staunch opposition to drug use.

‘When I look back at the last four years I think we’ve managed to show our ChristenUnie signature and use our influence to steer policies in the right direction,’ says Van der Graaf.

She cites as an example the decision to end gas production sooner in her home province of Groningen, where thousands of homes have been damaged by earthquakes caused by the extraction process. ‘We didn’t manage to realise it during the coalition negotiations, but a few years later we took the decision to scale back gas extraction and ensure people’s safety.’

The ChristenUnie also played a key role in reversing the justice ministry’s decision to close prisons in the northern provinces, which are an important source of employment in rural areas. ‘We said we’re not going to support this decision and fortunately it didn’t go through and the prisons stayed open,’ she says. ‘So it’s clear that at crucial moments, it made a difference that the ChristenUnie was at the table.’

Segers has said during this campaign that the CU will demand an even higher price for its place at the cabinet than four years ago. ‘We don’t give up the fight,’ says Van der Graaf. ‘These days you always need several parties [in a coalition], and that by definition means you can’t always get what you want. It involves give and take. But what characterises people in our party is that they are very driven. We go into politics in order to serve people.

‘We want a more generous and charitable policy on refugees and migration which is justifiable. And in the next cabinet term we need to take big steps on the issue of climate. We need to take strong steps to make our healthcare fit for the future, accessible and nearby, and reform the economy to put people at its centre.’

The CU’s small size means Van der Graaf handles a diverse portfolio spanning justice, Europe, education, home and foreign affairs. She has also led the party’s efforts to end prostitution in the Netherlands by making paying for sex illegal, though a proposed law last September to introduce a Scandinavian-style ban was only supported by coalition partners the Christian Democrats (CDA) and the opposition SGP.

‘The last 20 years of legal prostitution in the Netherlands has shown that it simply doesn’t work,’ says Van der Graaf. ‘Last year the national reporter on human trafficking identified 1300 minors who had ended up in prostitution, and that’s only the tip of the iceberg, because they could only identify a tiny percentage.’

The Scandinavian approach is not a ‘panacea for all ills’, Van der Graaf acknowledges, but ‘it would be a ‘revolutionary step comparable with the abolition of the brothel ban 20 years ago.’

Her experience of shadowing support workers in the sector has strengthened her perception that human trafficking and forced prostitution are rife. ‘There is a group who say they are doing this voluntarily, but I know that for many women in this sector it’s not a free choice, but a choice between two evils,’ she says.

The coronavirus crisis has brought to light the informal, semi-legal character of the trade, says Van der Graaf, who has campaigned to extend financial support to sex workers who often operate on the margins of legality. ‘We’ve found people working who aren’t registered with the chamber of commerce or as sole traders (zzp’ers). As a result they’ve been left in the lurch by the coronavirus measures.

‘The government can’t afford to close its eyes to them. As a group they’re often invisible and it’s important that we look out for them.’

What king Willem-Alexander called the ‘virus of loneliness’ and the challenges for people living and working on the margins of society have become more apparent during the lockdown, she says. ‘If I look at people’s mental health, including young people, they’ve really been hit hard.

The way our economy and our labour market are organised is in urgent need of reform. Solo entrepreneurs were suddenly in an incredibly vulnerable position. I wouldn’t want to suggest that we’ll all know what it’s like to be lonely by the time corona is over, but I hope we’ll be more aware of it.’

The CU has also produced a plan for a ‘drugs-free society’, an ambitious and some might say fanciful plan given the Netherlands’ well-established ‘coffeeshop’ culture. It entails a switch of emphasis from tolerating drug use to eliminating drug dependence and boosting support for people struggling with addiction. It is another issue on which the CU is diametrically opposed to D66, which has proposed regulating more drugs, including ecstasy and cocaine, in order to reduce the risk to health.

‘We have a really big problem with drugs in the Netherlands,’ Van der Graaf says. ‘Drug use seems normal. That’s the taboo that we need to break. I talk to parents who tell of boxes or pencil cases being handed round classrooms where you put in money and take out a pill. In the classroom!

‘It’s madness that it happens so openly. I don’t think repression is the only answer, but I think it’s an aspect we should look at. But I think we should pay more attention to warnings, to prevention, to education and help for young people. I spend a lot of time in youth detention centres and it’s not the big fish who end up there, it’s the younger ones who can’t cope and end up in prison.’

Education and prevention are also at the heart of the CU’s policy on abortion, which again blends a principled belief in the rights of the unborn child with a practical approach. Last December the party dropped its opposition to contraception and argued that the pill should be covered by universal basic healthcare as a means of preventing abortion.

‘It was a far-reaching step in the eyes of many conservative people, but it showed that our party isn’t standing still on these issues. It shows we are willing to take a step forward on behalf of women and unborn children. This will reduce the abortion rate,’ says Van der Graaf.

Abortion itself remains a no-go area, even in developing countries, where Lilianne Ploumen, who recently became the leader of the Labour party (PvdA), established the She Decides fund to support family planning and safe abortion services which had been defunded by former US president Donald Trump’s Global Gag Rule.

‘I think that if you restrict the subject of sexual and reproductive rights to a She Decides Fund, you narrow your development aid regarding the rights of women and children,’ Van der Graag argues.

‘I will always fight to ensure women are not being oppressed and I think our first priority is to help these women. But I think it’s too narrow to say that we should limit that help to enabling legal abortions.’

The CU’s steady return of five or six seats reflects its solid base of around 25,000 members, which has been the case since it was formed in 2000 as an alliance of Protestant parties. Latterly it has sought to broaden its appeal by fanning out to other Christian churches, notably Catholics, but also migrant churches with their roots in Suriname, Egypt and Syria.

‘The Christian social ethos is deeply rooted in our party; we strive for a just society,’ says Van der Graaf. ‘That’s a message that speaks to far more people and a much broader group of Christians.’

Could she imagine the party welcoming other faiths such as Muslims, if they share common views on family values, end-of-life care and the rights of the unborn child? ‘I’m pretty sure there are already people in the Islamic community who vote for the ChristenUnie,’ Van der Graaf says.

‘But at the end of the day we are a Christian party striving for a good and just society. If someone wants to represent our party they have to sign up to our principles, and I think that might be a bridge too far for someone with an Islamic background.’