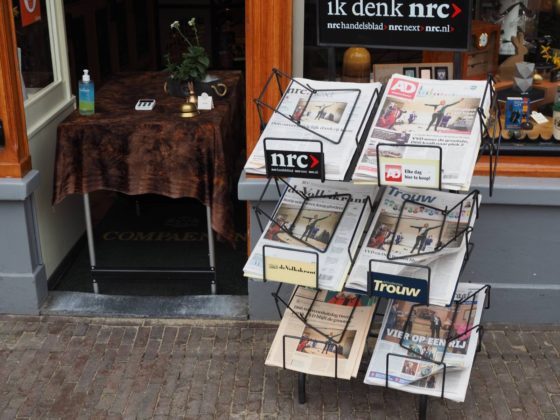 Pictures of D66 leader Sigrid Kaag dancing on a table after the first election exit poll dominate the front pages of the Dutch papers on Thursday.

Indeed, the meteoric rise of D66 under Kaag makes her the first serious challenger to Mark Rutte’s uninterrupted hegemony of the last ten years, the Financieele Dagblad comments, and this may become apparent early on.

‘The D66 election victory will put an entirely new gloss on the coalition. The Democrats, moral victors of these elections, will want to make issues such equal opportunities, climate and a pro-European stance the main pillars of government policy,’ the paper said.

And while Rutte has hinted that another centre right coalition is again on the cards, Kaag has said she would aim for a cabinet which is ‘as progressive as possible.’ However, with the hit that the PvdA, GroenLinks and SP received, that may require a rethink, the paper said.

Mark Rutte put ‘the rather diffuse concept of trust’ centre stage, the Volkskrant said in its analysis. Rather than asking for support for the VVD or the party manifesto Rutte put himself in the role of ‘the statesman who was going to lead us out of the desert’.

He was, however, taking a risk as his reliability on other subjects such as care, education and student grants, came under increased scrutiny in the weeks running up to the election which he entered with a slightly tarnished image, the paper said.

‘Rutte became the man who had been prime minister too long and who was partly to blame for the childcare benefit scandal. (..) Taking all this into account he came out of it almost miraculously well,’ the paper said.

The FvD’s unexpected rise from two to eight seats was entirely down to a campaign that was centred on one thing only: an end to the lockdown measures, the NRC said.

The departure of his critics following the internal combustion of his party over a flurry of anti-semitic and racist tweets, gave Baudet ‘complete freedom’ which he used to capitalise on ‘coronamoeheid’ or the rising resentment against the measures.

‘Other parties could see it but did not want to minimise the impact of the virus, giving Baudet the opportunity to be the only voice against the coronavirus policy. (..) Some half a million wanted an end to lockdown and nothing more,’ the paper said.

Who will be the fourth party in the coalition now that it doesn’t look as if VVD, D66 and CDA will have enough seats to continue without one, asks the AD? It will certainly not be the ChristenUnie which may have lost a seat and which is fundamentally at odds with the now more influential D66 on matters such as euthanasia, the AD said in its analysis.

But whatever the composition of the next government, Rutte IV ‘is not likely to survive for very long’, the paper said. ‘Too many parties are waiting in the wings to break the power of the VVD  for once and for all. Everyone is looking for opportunities to make an end of Rutte. And once the coronavirus crisis is behind us, that may happen sooner rather than later,’ the paper said.

The Telegraaf, which makes short shrift of the PvdA (‘sunk after Assscher’s departure’) GroenLinks (‘unconvincing’) and CDA (‘messy campaign’) is the only paper to report on whispers in VVD circles that the party may be interested in far right JA21 as a fourth partner ‘because of the number of seats it will have in the Senate’.