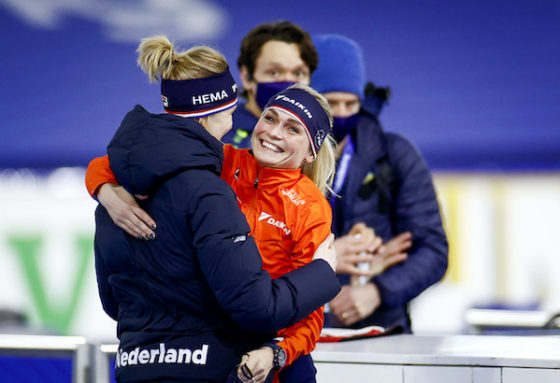 Dutch speed skaters took seven of the 14 gold medals at this year’s World Championships in Heerenveen, ending a compressed season which took place at the Thialf stadium over four weeks.

The International Skating Union decided last year to stage all the events in Heerenveen to form a bubble for skaters and officials in the international competitions.

In the final of the four events, Irene Schouten took gold in the 5 km – a first for a Dutch woman – while Antoinette de Jong won gold in the 3km.  In the men’s event Kai Verbij took the 1,000 metre title and Thomas Krol the 1,500 metres.

The Dutch men and women’s teams both took the team pursuit titles and newcomer Marijke Groenewoud was surprise winner of the women’s mass start event.

However, the big star of the event was Sweden’s Nils van de Poel, grandson of Dutch immigrants, who took both the 10km and the 5km, setting a new world record in the longer distance, the NRC reported.

For the first time since 2006, no Dutch women won a medal in the 1,500 metres and Jutta Leerdam lost her title in the 1,000 metres to Brittany Bowe of the US. ‘Perhaps it is better that way,’ she told the paper afterwards. ‘I know I have competition and that keeps me sharp.’

‘It was a strange skating year,’ the paper said in its analysis. ‘But the end was appropriate, with a lot of surprises, and not always the best ones for the Dutch.’