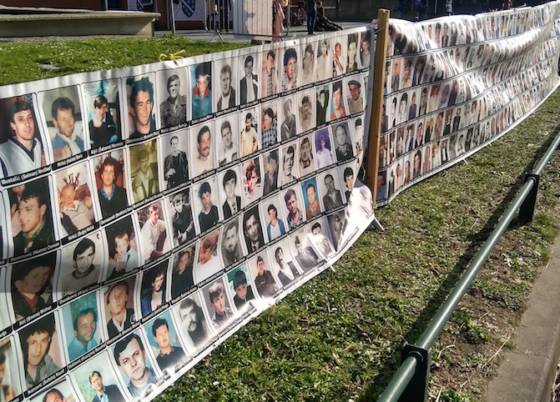 Photos of victims in front of the Supreme Court in 2019. Photo: Molly Quell

The Dutch government has announced that it will make a special ‘gesture’ in recognition of the military unit that was involved at the fall of Srebenica in 1995.

The Dutchbat III unit was part of a UN peacekeeping mission and had been sent to protect a Muslim enclave from Bosnian Serb forces during the Bosnian War. However, after the area fell, some 8,000 Muslim men and boys were massacred at Bosnian Serb hands in July 1995, and the Dutch state was later found to be 10% liable for their deaths.

But a Dutch report last year also found that, 25 years after the events, many veterans of the unit are still suffering psychological trauma as a result of their own experiences during that war. One in three was still in need of care or treatment, the report found, and almost all of the 850 veterans felt insufficiently recognised and rewarded for their efforts.

According to reports in the Dutch media, former veterans of the ‘Dutchbatters’ are to be given a ‘symbolic’ €5,000, tax free, and it is likely that the ‘gesture’ will take the form of a special meeting. Defence minister Ank Bijlevend-Schouten has also promised that all of the unit will soon receive a letter with an offer of professional help.