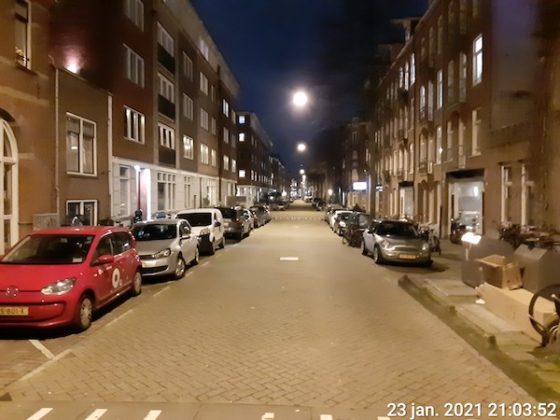 An Amsterdam street, as the curfew began in January. Photo: Odi Busman

Ministers are set to extend the curfew for a further three weeks, but hairdressers may be allowed to operate again and secondary schools will open on March 1 for limited teaching, sources have told broadcaster NOS.

Ministers and government health experts met at prime minister Mark Rutte’s official residence on Sunday to discuss the next steps in the coronavirus strategy – as the number of positive tests rose for three days in a row.

Rutte and health minister Hugo de Jonge are due to hold a press conference on Tuesday to outline the latest situation, and both the lockdown and curfew had been due to expire on March 2.

On Friday, as expected, senators voted in favour of new legislation to anchor the curfew in law, following last week’s legal wrangling.

Meanwhile, De Jonge said that the one millionth coronavirus injection was given on Sunday, and that around 154,400 people have now had both doses. ‘The quicker we move on, the quicker we get back to normal,’ De Jonge said on Twitter.

According to the European Centre for Disease Prevention and Control, some 4.5% of the Dutch population have now been vaccinated, putting the Netherlands just above Belgium, Germany and Spain.

The Netherlands was the last country in Europe to start vaccinating its nationals, and was heavily criticised for failing to respond quickly enough to changes in vaccine availability.

According to NOS, the cabinet expects capacity to have been ramped up to 2.5 million injections per week by the second quarter of the year.

Three vaccines are currently being used in the Netherlands – Pfizer, Moderna and AstraZeneca. The Leiden-developed Janssen vaccine, which only requires one dose, is currently being assessed by the European Medicines Agency.

On Sunday, the RIVM figures showed a further 4,720 positive tests, up 142 on Saturday’s total and well above the average of 3,935 over the past week. However, that may partly be explained by the fact testing centres were closed for several days because of the wintry weather.

The increase may also be due to the spread of the more infectious variant of coronavirus first identified in Britain, but this remains unclear.

Fewer people are being treated in hospital for coronavirus. On Sunday morning, there were 1,849 coronavirus patients in hospital, of whom 534 were in intensive care.