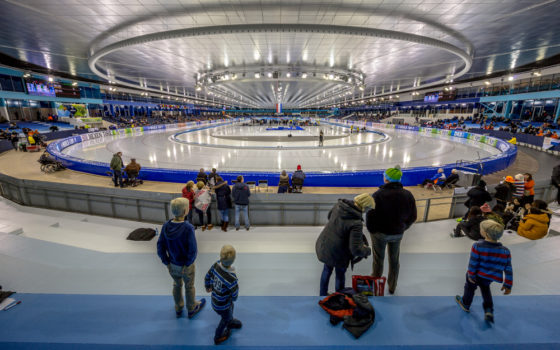 Spectators in the Thialf stadium in 2016. Photo: Depositphotos.com

Professional speed skaters and coaches have suggested the Thialf ice stadium in Heerenveen has tampered with the air vents to give skaters an unfair advantage, the AD reported at the weekend.

The 600 vents around the rink are used to create ‘a curtain of air’ between the stands and the ice rink to prevent moisture from affecting the ice. Normally positioned to blow the air straight up, they have now been changed to create a tailwind straight into the skaters’ backs, putting in doubt record speeds achieved at the stadium, skating pundits claim.

‘My sporting heart hurts,’ Sven Kramer told the paper. ‘Thialf is apparently so eager to collect records the end justifies the means.’

Kramer said he noticed ‘a stronger than average wind from the vents’ when he skated a very fast time at last week’s world championships and said his comments about this to Thialf officials were ignored. ‘I don’t care who wins what in which time but I want to skate an honest race,’ Kramer said.

Coach Erben Wennemars was the first to comment publicly on the position of the air vents at the end of the world championship of December last year, the AD said. ‘I had been saying all winter that world records would be broken in Thialf. But that was impossible. Should we jump for joy? I can’t because I don’t know if they are legitimate,’ Wennemars told the paper.

Stories about tailwinds caused by air vents are not new, the AD said, citing similar incidences at the 2016 world championships in Kolomna and the 2014 Olympics at Sochi. ‘And now it’s our turn to be ridiculed,’ Wennemars said.

Thialf director Marc Winters, who has been confronted with an annual deficit of over a million euros a year as well as problems with staff, has said the direction of the vents was changed to ‘plug up holes in the air curtain’.

‘The adjustment does not cause a tailwind or any wind one way or the other because they are behind the boarding that separates the rink from the stands,’ he said.

However, the suspicion of many is that Thialf did change the direction of the vents to achieve faster times, coach Jillert Anema told the paper. ‘If Thialf says it doesn’t make any difference which way the vents blow they should turn them away from the direction the skaters are going in, and that will be that. Once you create an artificial tailwind you change the sport of skating.’

The KNVB skating federation said it had not proof of ‘active manipulation’ while international skating union ISU chairman Tron Espeli said no official complaints about an unfair advantage at Thialf had been received.

Winters said he regretted the commotion and that he would be happy to carry out tests to disprove the accusations.