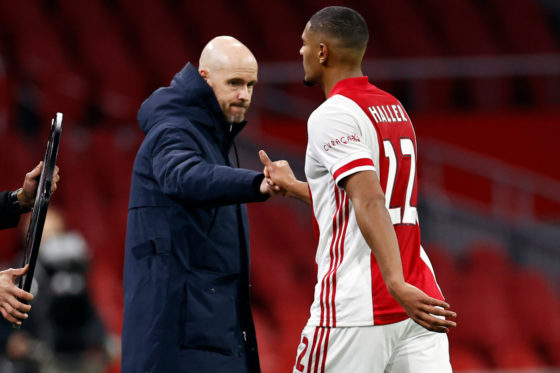 Ajax won their seventh Eredivisie match in a row to maintain their six-point lead at the top of the Eredivisie, with a game in hand over PSV Eindhoven.

Erik ten Hag said his team played a ‘perfect match’ in the first half against Sparta as they scored three times without reply through Sebastian Haller, twice, and Perr Schuurs. Mohammed Kudus added a fourth early in the second half, but Danzell Gravenberch then netted twice for Sparta as Ajax took their foot off the gas.

PSV had to do it the hard way against Vitesse Arnhem after going 1-0 behind in the fourth minute to Armando Broja’s smart finish. Vitesse were denied a penalty just before half-time when the VAR panel spotted that Broja had been fouled just outside the area.

In the second half PSV were a different proposition as Donyell Malen, Mario Götze and Philippe Max came on as substitutes. Malen lashed in an equaliser after 66 minutes before Götze struck twice in the last five minutes to claim the points.

AZ Alkmaar strengthened their grip on third place with a 4-1 win over VVV Venlo. The Limburgers lost Christian Kum just before the hour mark when he was sent off for hauling down Myron Boadu, who capitalised by scoring his seventh and eighth goals of the season.

At the bottom of the table Emmen recorded their first win of the season after 23 games to keep their slim hopes of survival alive. New signing Jari Vlak bagged the winner against PEC Zwolle, who relieved coach John Stegeman of his duties after the game.

The Drenthe side are still four points behind Willem II, who capitulated to Utrecht in a 6-0 home defeat, and ADO Den Haag, who went down 2-0 to a rejuvenated Fortuna Sittard.

Feyenoord snatched a point in Enschede despite conceding two goals in the opening quarter of an hour. Jens Toornstra brought Dick Advocaat’s side back into the game after 24 minutes with a rocket from the edge of the penalty area, before Steven Berghuis equalised from the penalty spot in the second half.

Heerenveen and Groningen shared the points in the northern derby. Siem de Jong gave the Frisians the lead with a tap-in to claim his first Eredivisie goal in nearly three years, while Groningen’s reply was a long-range strike from Slovakian forward Tomas Suslov.