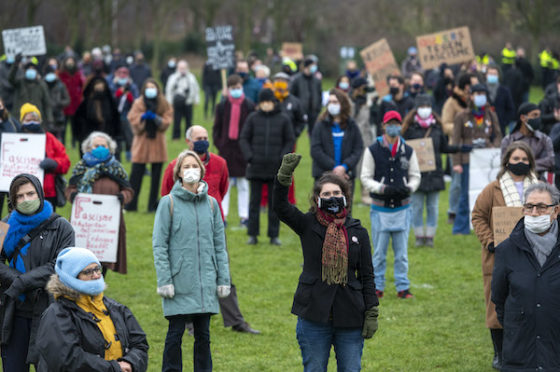 Anti-facism demonstrators in Amsterdam at the weekend. The demo was called in response to events in the US. Photo: Evert Elzinga ANP.

Geert Wilders’ far-right PVV published its manifesto for the March general elections at the weekend, including a ban on voting rights for dual nationals and the appointment of a minister for ‘re-emigration’.

The 50 page manifesto – in stark contrast to the one page document published ahead of the 2017 election – calls for a return to a ‘country without headscarves, but with old school Dutch coziness’.

The PVV says it aims to ‘de-Islamise’ the Netherlands by banning people from spreading ‘Islamic ideology’, closing borders and ending refugee permits for people from Syria. The party also wants to ban Islamic faith schools but keep those from other faiths.

The Netherlands should also leave the EU, scrap the public broadcasting system and use the army to ‘regain the streets’ where necessary, the manifesto states.

The PVV is currently in second place in the opinion polls and is forecast to win between 19 and 23 seats in the 150 seat parliament in the March vote. That translates into between 12.4% and 14.2% of the vote in the highly fragmented Dutch political landscape, and is just head of the CDA.

CDA leader Wopke Hoekstra said at the weekend that he could not imagine his party joining forces in a coalition with the PVV after the general election. The CDA can only work with parties which ‘take the constitution seriously and fully support it’, he said.

The CDA and VVD formed a minority cabinet with PVV support after the 2010 election, which collapsed 18 months later.

Support for the PVV peaked at around 25% in 2016, but Wilders only managed to win 20 seats in the 2017 general election. The PVV has, however, picked up some support since the collapse of the far right FvD.

Prime minister Mark Rutte’s VVD remains far in the lead in the opinion polls, with between 26% and 28.5% support.