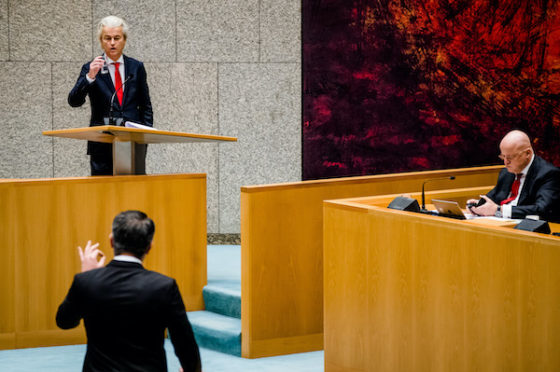 There is no need to bring in the army to quell riots at present but neither is there a taboo on doing so if needed, prime minister Mark Rutte told MPs during a debate on the recent troubles on Wednesday.

Far right leader Geert Wilders called on the government to put the army on standby, saying soldiers would be able to relieve pressure on the police, who are already overstretched. ‘That is what we have an army for,’ he told MPs. ‘Hopefully the idiots stop rioting, but if they don’t… we should be ready.’

Mayors and police chiefs have said already they do not need reinforcements, and Tuesday evening passed off relatively peacefully, in the wake of Monday’s clashes.

Rutte told MPs that police chiefs have made it clear they can cope at present, and there is ‘no added value’ to taking such a step.

Justice minister Ferd Grapperhaus pointed out the armed forces are already involved, given the the riot police (ME or marechaussee) fall under defence ministry control. ‘Not a single mayor in my regular talks with them has said to me, “would you think about the army”,’ he said.

In total, police made 131 arrests on Tuesday night, most of them in Rotterdam, and most of those picked up were under the age of 25. Tuesday’s arrests take the total since the 9pm curfew was introduced on Saturday to over 560.

Are the rioters spoilt, frustrated or on a moral holiday?

King Willem-Alexander and queen Maxima issued a statement on Wednesday, praising the emergency services workers for their ‘fantastic work’ during the ‘difficult circumstances’ of the past few days.

The royals said that their thoughts went out to ‘all the small business owners and others who have been affected by violence’. And at the same time, they said they have been impressed by all the ‘heart-warming reactions’ from people who are helping each other. ‘Together we will get through this,’ the message said.