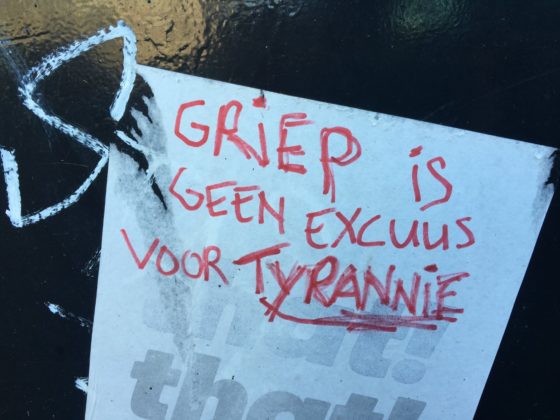 Flu is not an excuse for tyranny – a poster in Amsterdam. Photo: DutchNews.nl

So who are the rioters who have taken to the streets all over the Netherlands for the past few days, and why are they rioting? Commentators and experts have been trying to attach some meaning to this week’s street violence.

Journalist Catherine Keyl, who was present at some of the squatters riots in Amsterdam 40 years ago and made a documentary about Urk, is in no doubt in the Telegraaf. ‘It’s too easy to call these people scum, or say they’re being held back through lack of opportunities, or that they simply don’t hold with authority,’ she wrote.

‘I fear that what we have here is a bunch of spoiled brats who are bored and go on the rampage for kicks. Am I wrong to say that girls were in a minority? In that case there is some hope for the future.’

Foreign commentator Bernard Hammelburg said on BNR radio that the riots were ‘not that different’ from what happened at the Capitol in the US. ‘Torching a test facility, demolishing a train station and attacking a hospital is perhaps worse than storming a parliamentary building,’ he said.

‘Anti-corona measures nutjobs  are linking arms with anti-corona measures hooligans, he said. ‘These are the types who, at home, in their own environment and even without going on demonstrations don’t give a shit either. I’m pretty sure these are the groups that are largely responsible for the high number of infections. And the curfew that they’re so opposed to.’

In the NRC, political scientist Léonie de Jonge said that although it is not exactly clear who the rioters are and what motivates them, some had clearly been listening to the far right. The PVV and Forum voor Democratie, she said ‘incited the events because they literally called for riots’.

She pointed out that the local branch of the PVV on Urk said it ‘would do everything in its power prevent the curfew from taking place place’ and that the FvD had said ‘this is the second night that Rutte imprisons the Netherlands. The FvD will continue to resist’.  These incendiary right wing messages for the behaviour of some of the rioters, can be firmly laid at the parties’ front doors, she said.

In an analysis on news site Nu.nl, sociologist Don Weenink said the riots of the last few days were not necessarily politically motivated. ‘What we saw in Amsterdam is that a large group sees the anti coronavirus measures as an intensification of state control and that they honestly believe that the virus is used to control and manipulate people,’ he wrote.

‘And in their wake hooligans then believed this legitimised the use of violence because they feel the government doesn’t listen to them anyway.’ Weenink called the ‘excitement and feeling of power’ the youngsters experience ‘a moral holiday’.

In Trouw columnist Stevo Akkerman said the rioters were a ‘strange mix of conspiracy theorists, extreme nationalists and bored adolescents’.

‘But all riots have one thing in common,’ he said. ‘The perpetrators are men, men are the perpetrators. I don’t know if it’s in their genes, their upbringing or their social environment but probably it’s a bit of everything. But we can no longer look away. [..] Whatever it is it’s what we call ‘a thing’.’

In the same paper, behavioural psychologist Frenk van Harreveld said that ‘no mercy’ should be shown to hardened rioters. ‘There’s only one thing you can do with this small group and that is lock them up,’ Herreveld said.

This will also prevent the large group who demonstrated peacefully from being ‘sucked into their sentiment’, Van Harreveld said. ‘No matter how difficult, the police must distinguish between the different sub groups. You mustn’t alienate peaceful protesters by treating them as hooligans. Talk to them instead of confronting them with batons and shields.’

On opinion site Joop sociologist and columnist Shervin Nekuee objected to the incendiary use of war terms and pleaded for ‘understanding of the rioting youngsters’. ‘The refusal to understand what is happening with these youngsters is indicative of the failure by the stable middle classes to put themselves in their place,’ Nekuee said.

It is not easy, he wrote, ‘if you are young and dependent for social, cultural and material sustenance on parents who have not much to give to show resilience and swallow your frustration in the face of the current measures that are extra constricting for young souls.’