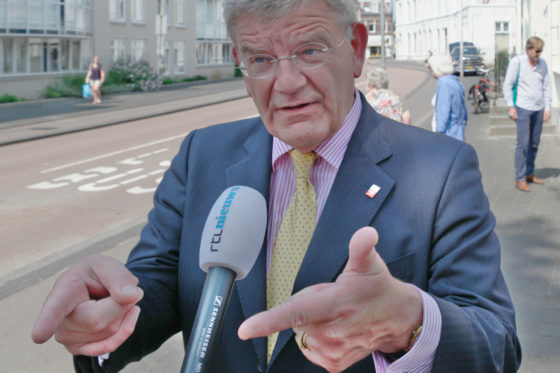 The mayor of The Hague, Jan van Zanen, was aware of the controversial ‘demonstration’ in Duindorp on New Year’s Eve which saw hundreds of people, including children, dancing and chanting while ignoring social distancing rules.

Local news station Omroep West reported that the cost of the festive lights at the event, quoted as being around €10,000, was paid for by the city council. A spokesman said the demonstration was not directly funded, but money was allocated for an ‘alternative programme’ to the regular New Year celebrations, including lighting.

Some of those involved in the planning told Omroep West that the idea to stage a demonstration came from the mayor himself, out of concern that the neighbourhood could become unruly in the absence of New Year celebrations and fireworks.

Last year there were several nights of rioting and disorder in Duindorp and Scheveningen when the traditional beach fires were cancelled on safety grounds. In a letter to the council in October, before the lockdown was imposed, the mayor expressed his concern about ‘major challenges’ around New Year that could lead to ‘mischief or worse forms of disturbance in public spaces’.

Van Zanen said at the weekend that the demonstration had been notified in advance to the authorities and footage of the event was being studied, but there was ‘no question’ of it being an authorised street party.

‘It was a genuine demonstration that ended at the agreed time. But we are going to take a good look at it,’ the mayor said.

Omroep West reported that a demonstration was one of the options put forward during discussions about possible alternatives to New Year festivities that complied with coronavirus lockdown rules.

Van Zanen said that demonstrations were ‘always allowed’ provided they were genuine protests. Two banners were hung up in Duindorp’s Tesselplein during the event, which mostly featured families dancing to music. Police did not intervene even though video footage showed few of those taking part wore masks or kept the required 1.5 metres apart.

Sources told Omroep West that police were reluctant to endorse the event, but the council said it had been agreed within the driehoek of police, justice and the local authority that considers public safety issues.

Kavish Partiman, leader of the Christian Democrat group on the city council, said the demonstration sent out ‘completely the wrong signals’ to people who had stuck to the rules and given up their usual New Year celebrations.

‘So if you kick up a fuss for long enough and the council is worried about things getting out of hand, you get to have a party,’ he said on Twitter.

The right-wing liberal VVD party, to which Van Zanen is affiliated, has submitted written questions to the council about the event.