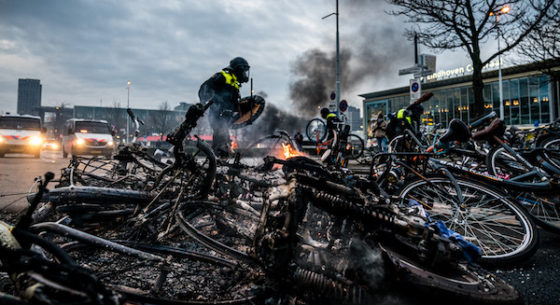 Some 240 people have been arrested, mostly in Amsterdam, after riots broke out in at least 10 cities across the Netherlands on Sunday evening.

Trouble first flared in Amsterdam and Eindhoven, where anti-coronavirus measure protestors turned up to demonstrate even though the gatherings had been banned.

As the 9pm curfew approached, gangs of youths began attacking police in several other cities, including Tilburg and Enschede, where youngsters threw stones at the local hospital. It was forced to call in extra security.

Tilburg mayor Theo Weterings said the rioting was ‘absolutely reprehensible’. ‘Shops which are already struggling were vandalised,’ he said. ‘Throwing stones and fireworks is outrageous’.

Although the protests were ostensibly to protest about the curfew and other coronavirus measures, commentators said many of those who showed up appeared to be young men out to cause trouble.

‘This is not demonstrating, I would call these people corona hooligans,’ Hubert Bruls, chairman of the regional safety board association told television chat show Op1.

Eindhoven mayor John Jorritsma van Eindhoven was more emotional. ‘If we carry on like this, we will be heading toward civil war,’ he told reporters.

Riot police were drafted in to The Hague’s Schilderswijk district after fires were started. In Helmond around 50 youngsters gathered together after a call to demonstrate on Snapchat. ‘There were around 50 youngsters, who threw stones and fireworks at police,’ a police spokesman told broadcaster NOS.

In Venlo too, a group of mainly young men threw rocks at police and broke shop windows, and there were also disturbances in Stein and Roermond.  In Tilburg there were at least 19 arrests and it took until around midnight to restore order. A reporter for local paper Brabants Dagblad had to flee after being attacked by a group of some 15 men.

Police were also called in to deal with protestors in Oosterhout, Almelo, Venlo, Helmond, Breda, Arnhem and Apeldoorn, broadcasters RTL and NOS said.

Earlier in the day, around 190 people were arrested in Amsterdam and at least 30 in Eindhoven after riot police were drafted in to break up illegal demonstrations.

In Eindhoven, police used tear gas and water cannon to disperse a crowd of several hundred people on the 18 Septemberplein. Train services to and from Eindhoven were also disrupted and station shops plundered as gangs of youths went on the rampage and 55 people were arrested.

In Amsterdam several hundred people went to the Museumplein to protest about the curfew despite warnings to stay away. Here too, police used water cannon and dogs to break up the crowd and the skirmished continued well into the evening.

On Saturday night, the first curfew in the Netherlands since the end of World War II, police arrested 25 people and handed out 3,600 fines for curfew violations.

Riot police were also called out to deal with trouble in the staunchly Protestant former island of Urk and in Stein in Limburg.

The Netherlands has been in lockdown since mid December, when schools and non-essential shops were closed. Bars and restaurants were closed in October when the second wave of coronavirus infections began.