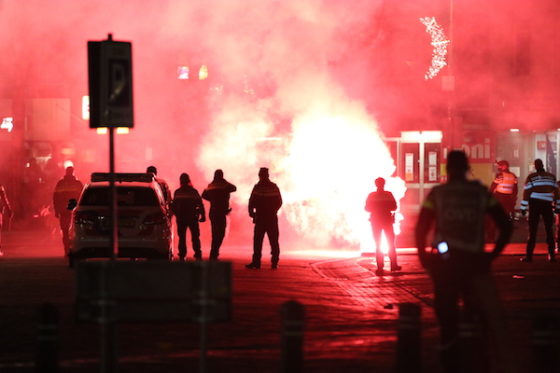 The first curfew in the Netherlands since the occupation during World War II began smoothly in most part of the country but riot police were drafted in to restore order on the staunchly Protestant former island of Urk after youths went on the rampage.

Dozens of youngsters, many honking horns in cars and on mopeds, went to the village’s harbour area just after the 9pm deadline and set the drive-in coronavirus test centre on fire.

Police have not yet said how many arrests were made but local mayor Cees van den Bos said the events were ‘dramatic’.

‘I am so ashamed of what has happened,’ Van den Bos said, before evoking his emergency powers and calling in the riot police. In the event, calm was restored before the riot police were needed.

Urk was also the scene of rioting by youngsters in November and December.

Elsewhere, police also reported trouble in Stein, a town of 24,000 in Limburg, close to the Belgian border. At least 14 arrests were made after a group of around 100 youngsters refused to go home, and stood outside drinking and playing music. Some also pelted police with fireworks, local broadcaster 1Limburg reported.

In central Rotterdam, 50 people were fined for continuing their protest against the coronavirus rules and the curfew, and there was also a small protest in Amersfoort, website Nu.nl said.

Some people who did break the curfew were fined, and police handed out 45 fines to drivers on the A2 motorway who were stopped and did not have a valid reason to travel.

In most of the country it was ‘totally quiet’ after the 9pm deadline to return home, police said.